Norbert Tadeusz is undoubtedly one of the most important German painters of the post-war period, even though his decision for and his adherence to figurative painting did not always garner him the attention he deserved in contemporary art discourse. In cooperation with Norbert Tadeusz' Estate, Galerie Beck & Eggeling seeks not only to she new light on the famous work groups of the 'Cavalli', the slaughterhouse paintings, and the nudes, but also on less well-known creative phases, thus reviving the discussion about this important position in German painting.

In 1961, Norbert Tadeusz, who was 21 at the time, transferred from the Werkkunstschule in his hometown of Dortmund to the Kunstakademie in Düsseldorf, which was poised to become the (at least temporary) centre of the avant-garde in (West) Germany. At that time, the protagonists of the German Informel led the painting classes, while the ZERO group had been rethinking art from scratch and was starting to achieve its first international successes. It was also the time when the greatest German 'new thinker', Joseph Beuys, transformed the Kunstakademie Düsseldorf into his own stage. Tadeusz finally ended up in his sculpture class after stints in the classes of Gerhard Hoehme and Joseph Fassbender, where he was unnerved by the dogma of abstraction and briefly toyed with the idea of becoming a sculptor.

During this time, Norbert Tadeusz decided to commit himself to naturalistic figurative painting. His fellow students (Polke, Richter, Palermo, etc.) would derisively ask whether he thought at all or only painted, while his professor's expanded concept of art and its related discourses would only accommodate painting as a medium for conceptual approaches, or at best for socio-political commentary. To these remarks, he defiantly and confidently responded 'I'm not an artist, I'm a painter'. In this sense, his art is always one thing above all others: a celebration of painting itself. Norbert Tadeusz admired the old masters, especially artists of the Italian Renaissance. He also admired the grandmasters of modernism and also a handful of contemporaries. He never shied away from referring to these role models–sometimes more, sometimes less obviously–in his own works. On the contrary, his work is founded on a profound examination of art history. Not as an epigone, but as a craftsman who skillfully took advantage of and continued the traditional techniques and achievements of art history. Figure, space, perspective, colour, light, and shadow–the parameters of our visible reality were also the parameters of his artistic work, which he explored anew with each new picture.

For him, composition always came first, only then did the subject follow. Spaces, bodies, things, even everyday trivialities–a pair of shoes under the bed, the reflection of light on the wall: everything in his pictures could become a visual sensation. Norbert Tadeusz knew about the magic of painting. And he knew that painting does not have to be reinvented, squeezed into concepts or discourses in order to astonish, inspire reflection, and touch its audience.

Norbert Tadeusz (1940–2011) was born in Dortmund and studied from 1961 to 1966 at the Kunstakademie Düsseldorf with Gerhard Hoehme, Joseph Fassbender, and Joseph Beuys. His first institutional solo exhibition was held in 1970 at the Kunstmuseum Düsseldorf at the Ehrenhof and numerous solo exhibitions followed in German institutions. In 1982 he participated in the Venice Biennale and later exhibited throughout Europe, Asia, and the United States. Since 1992 the Museum Insel Hombroich has been home to the Tadeusz Pavilion, which was especially built for the presentation of his monumental paintings. In addition to his artistic activities, he was professor at the art academies in Münster, Karlsruhe, Berlin, and Braunschweig. Norbert Tadeusz died on 11 July 2011 in his studio in Düsseldorf. Most recently, his work has been exhibited at the ESMoA (in collaboration with the Los Angeles County Museum of Art), El Segundo, USA, and the Faurschou Foundation in Hong Kong, China. 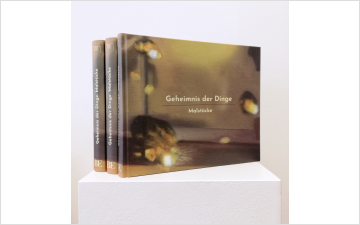 The Secret of Things