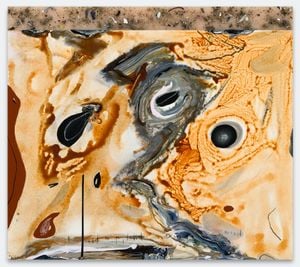 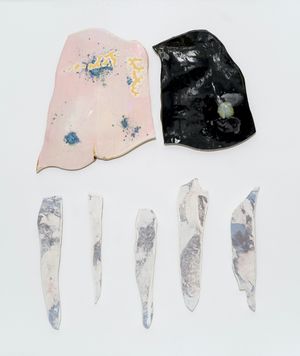 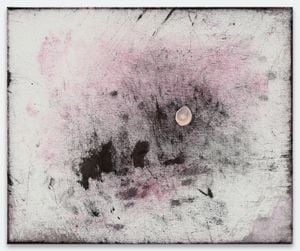 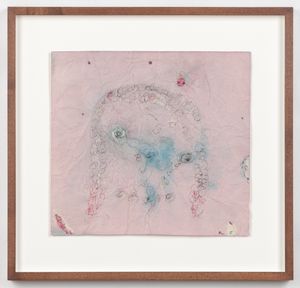 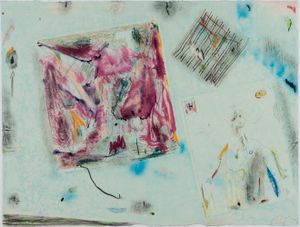 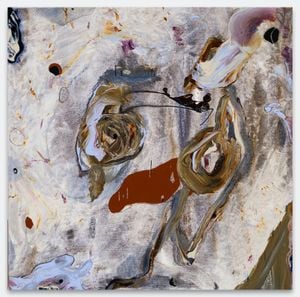 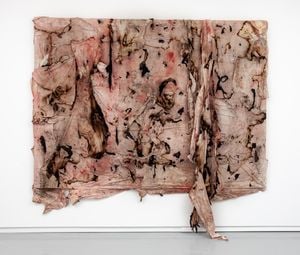 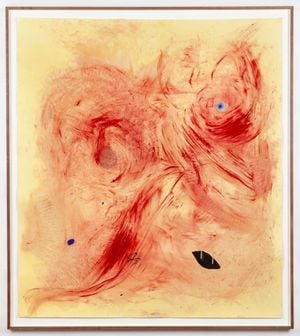 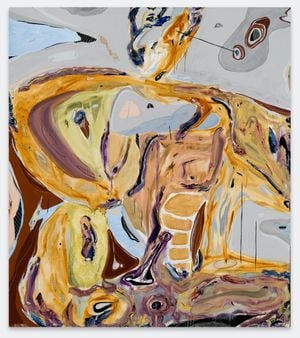 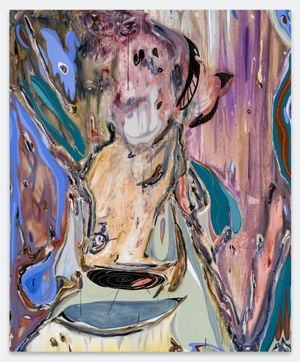 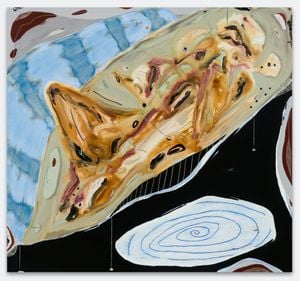 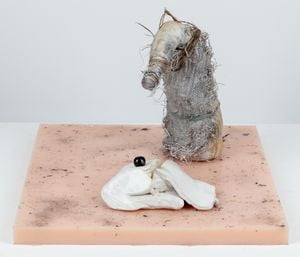 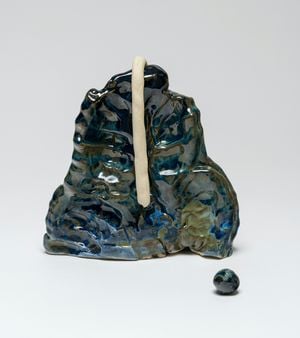 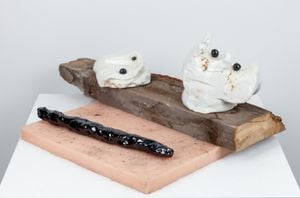 Manuel Mathieu has been thinking about the messiness of desire. In Negroland: A Landscape of Desires, his second solo exhibition with Kavi Gupta gallery in Chicago, Mathieu debuts a new body of metaphysical paintings and sculptures grounded in what the artist calls 'the dream that our desires can be perceived as more than transactional.'

He is speaking of physical, sexual, and sensual desire, of course. The exhibition's show card features a collaged image of the eyes of Jennifer Jackson, the first Black Playmate of the Month in Playboy Magazine, featured in the March 1965 issue, ironically during the civil rights movement.

In ten new paintings created for the show, soil, flesh, and sky become a singular, ever-evolving mass. Forms, figures, and colours swirl in sensual, primordial pools, as if melted together and poured onto the canvas.

Ceramics came into Mathieu's research as an element that triggers a sense of alchemy, turning the four elements into an object that carries a spiritual value. For Mathieu, this sense of awareness that the object can echo itself in several dimensions though our humanity and spirituality is at the core of the Black experience.

'In the slave ship when our destiny was shattered by disruptors and we were deprived of everything we owned and turned into objects, holding onto a rock during the crossing and turning that rock, just like the Igbo did before us, through our prayers into a symbol of our hopes and desires was pivotal to preserve what was most precious in us, our humanity,' says Mathieu. 'This exercise mimics our capacities as a Black people against all odds to transcend our experiences and turn dust into mountains.'

The installation All spells came from that idea of transforming simple elements and embedding them with a form of sensibility—a spiritual value that transcends our cognitive understanding of reality.

The ceramic sculptures are approached as conceptual subjects referencing the body in transformation, constantly returning to its core—Where should we begin. The artist understands these sculptures as existing 50 feet high outside of the gallery.

'"What can I specifically bring to the table, that no-one else can, spiritually?" was Mathieu's question after experiencing a near death experience. Taking up this task of singularity or authenticity, that is to say, using your soul for a purpose, relates to Ezili's principle—the possibility of creating beyond need, perceiving beyond reality, and desiring beyond mere survival. Mathieu's forms, whether in painting or more recently in ceramics and sculpture, straddle these socially constructed dualisms as a matter of course...He is always depicting something, but what's depicted is less an object and more a net of interrelations registered in a certain rhythm of forms."'

Mathieu says that during the past year working in isolation he came to see his studio as a sort of crucible—a container in which internal and external forces were creating the circumstances for transformation.

'The artist is also a crucible,' Mathieu says. 'Even as the inner forces are changing things, the crucible itself is also being altered. Things are merging inside of me and also changing me. What are those forces? With this body of work, I tried to get back to that sense of urgency that pushed me to become an artist and stay in the process with what is necessary.'

Haiti-born, Montreal-based multidisciplinary artist Manuel Mathieu (b. 1986) is known for works that investigate themes of historical violence, erasure, religious symbolism, nature, and the various futures made possible by the act of remembering. He earned his MFA from Goldsmiths, University of London, in 2016. Recent solo exhibitions include World Discovered Under Other Skies, The Power Plant, Toronto (2020); Survivance, Montreal Museum of Fine Arts, Montreal (2020); and Manuel Mathieu: Nobody Is Watching, Kavi Gupta, Chicago (2018).

Negroland: A Landscape of Desires With a busy year of exhibitions, new directions continue to emerge in the practice of painter Manuel Mathieu.

Sign up to be among the first to know when new exhibitions by Manuel Mathieu or at Kavi Gupta open.
Sign Up