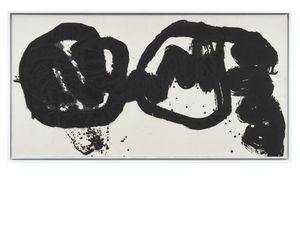 Yang JiechangHeaven and Earth in One Stroke (Sun and Moon), 2017–™018Ink and acrylic on Xuan-paper, mounted on canvas
122 x 235 cm SETAREH Contact Gallery 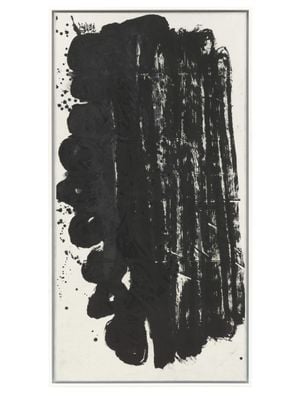 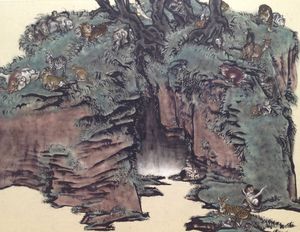 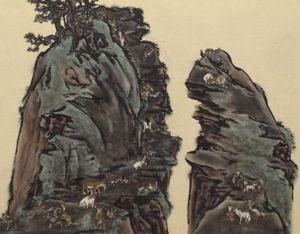 As a global and social notable figure, Yang Jiechang's calligraphically paintings operate as a form of activism, addressing the relation between the Eastern and the Western world. With graceful and skillful executions, Yang Jiechang's works deal with the divergent subjects of material and spiritual transcendence. Each work individually, reflects on nature's texture, romanticisations and spirituality, following entirely layers of ink. Timeless ink paintings form are the central practice of his art, which is both thematically and aesthetically wide-ranged and includes drawings as well as video works, sculptures, installations and ceramics.Yang Jiechang's aim is however to use art as a way of social and political action, to express sympathy and rebellion against any form of injustice. As a kind of participation, the artist explores traditional Chinese media and transfers it into a new modern way owing to the utilization of ink, mineral colour and calligraphy. By using the Chinese brush as a main tool, he takes part in the contemporary artworld. In addition, he adopts the performative expression of the traditional pattern, criticizing contemporary societies. The central concerns of Yang Jiechang's artistic practice is to review power, wealth, violence and terror within new modern structures.

"Being an artist is above all an attitude based on experience and communication. Art is a message encouraging the individual to go beyond his/her limits, to break conventions and taboos."

Yang Jiechang (b. 1956, based in Paris, FR and Heidelberg, DE), studied at the Guangzhou Academy of Fine Arts. After, he withdrew from art school to study with Buddhist and Daoist masters, who thaught him techniques which served as a base for his "Tales of the 11th Day" painting. The work depicts an imagined paradise roughly based on the setting for theDecameron, a work of fourteenth century Florentine literature by Giovanni Boccaccio. Whether copulating, embracing or simply observing living beings, it becomes clear that Yang's imagined paradise is a non-coercive one—based on power dynamics, where violence is completely missing.

Yang, who belongs to the second generation of contemporary artists in China, grew up during the Cultural Revolution (1966–1976). The beginning of his artistic career coincides with China's political opening in the late 1970s and early 1980s. From 1973 to 1978, he was trained at the ‚Folkart Institute' in Foshan in paper mounting, calligraphy and traditional Chinese painting, which he further developed over several decades and redefined in the light of the present-day. The text refers in parts to the curator Heinz-Nobert Jocks, who was involved in Yang Jiechang's exhibition in 2018.

Sign up to be among the first to know when new exhibitions by Yang Jiechang or at SETAREH open.
Sign UpLogin