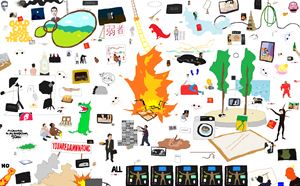 From 6 November to 20 December 2019, ShanghART Gallery is pleased to present Lin Aojie' solo exhibition Designers Have a Future Only When They Treat Artworks as Initial Inspiration at Building No. 8, West Bund, Shanghai. On view will be new works, such as painting, video and text, made after Lin's solo show at ShanghART Beijing earlier this year.

Lin's work always approaches the entire art ecology and the power of art system in a causal yet direct way, so as to conduct multi-dimensional examination and one-sided intervention. Continuing exploration of the identity of an artist and the development of art industry as in the Beijing show, this exhibition focuses on Lin Aojie's personal experience in receiving art education. On that basis, it not only conveys Lin's unique cognition and geopolitical thinking on art history, but also results in further practical actions.

As the title says, 'Designers have a future only when they treat artworks as initial inspiration', Lin Aojie also wanders around the intersections between art, design and popular culture, while the Chinese title 'Yue Xiu' is actually the name of a district in Guangzhou. The artist creates a series of animal stickers for the five spaces of ShanghART Gallery in Shanghai, Beijing and Singaporewith this solo exhibition these creative stickers will appear in corresponding spaces, acting as a subtle catalyst for the viewer's imagination.

Sign up to be among the first to know when new exhibitions by Lin Aojie or at ShanghART open.