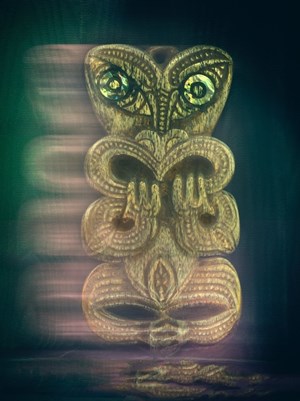 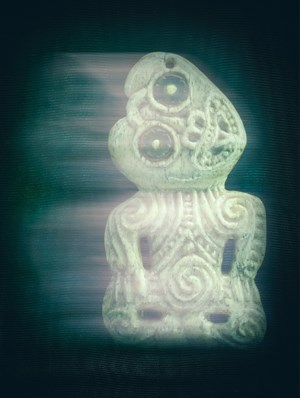 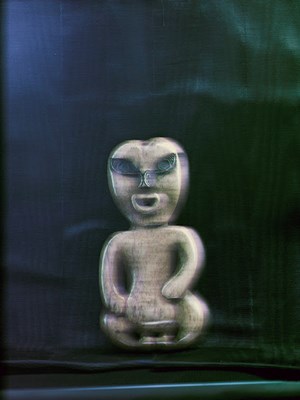 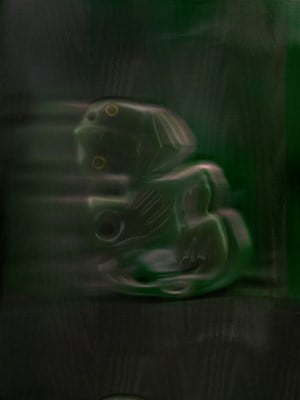 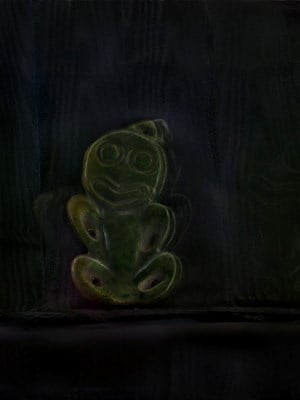 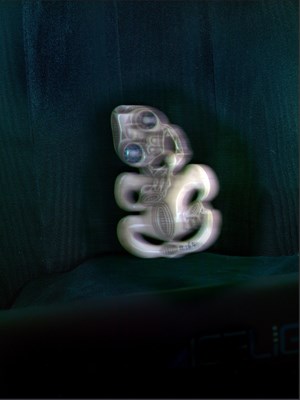 When Fiona Pardington found these unusual objects from the London Wellcome Collection, on loan to the city's Science Museum Group, she was struck by their mystery. Neither taonga, nor mass-produced trinket, they are as difficult to identify as their creators. Acquired from London auction houses, these faux hei-tiki were probably created for the Pākehā or international market—art historian Roger Blackley calls it the 'curio economy'—that flourished 1880-1910. 'Maoriland' was the poetic name for the romantic late colonial fiction they represent. It is impossible to say whether they were carved by entrepreneurial Māori amateurs, Pākehā enthusiasts (or forgers), or German lapidaries for export back to New Zealand for tourist souvenirs—perhaps all of the above. Pardington felt an affinity with their personality, hybridity and in-betweenness. She re-appropriates and breathes life into them with her camera and reparative vision, giving them dignity as the orphans of a complex history of interaction, exchange and exploitation. –Andrew Paul Wood, 2019

The exhibition is accompanied by an essay from R T Rickit, Drifting Stone.

The artist thanks the Wellcome Collection | Science Museum Group for their assistance with this project and exhibition.

Fiona Pardington has a Doctorate in Fine Arts from Auckland University. She was made a Laureate of the Arts Foundation of New Zealand in 2015, Chevalier of the Order of Arts and Letters by France in 2016 and a Member of the New Zealand Order of Merit in 2017. Her work has been included in many exhibitions in New Zealand and overseas, including: Oceania, Royal Academy of Art, London (2018) and Musee du Quai Branly, Paris (2019); Fiona Pardington: A Beautiful Hesitation (2015–2016), a survey exhibition organized by City Gallery Wellington; Honolulu Biennial Middle of Now|Here, 2017; Biennale of Sydney, THE BEAUTY OF DISTANCE (2010). She has been the recipient of many residencies, most recently at the Banff Centre for Arts and Creativity in Canada in 2019, funded by Creative New Zealand.

Sign up to be among the first to know when new exhibitions by Fiona Pardington or at Starkwhite open.