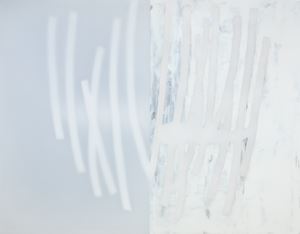 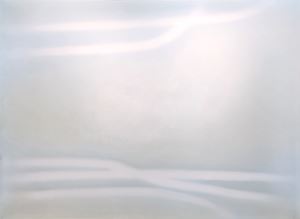 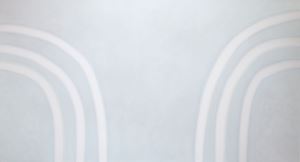 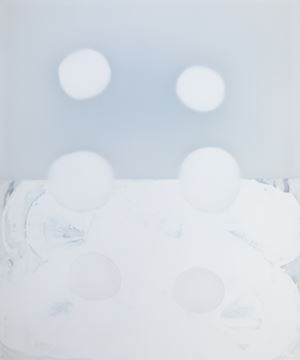 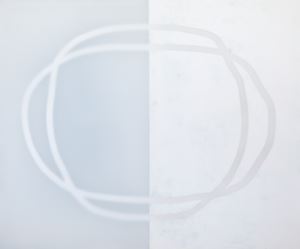 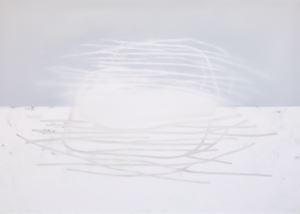 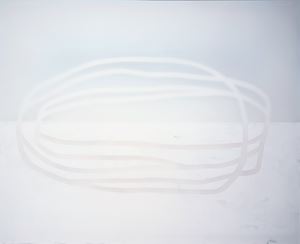 Nöger, who grew up in Enger, a town in Westphalia, Germany, emigrated to the U.S. in 1990 on a scholarship. In the earlier part of his career, he was known for his expressive figurative paintings that explore the dimensionality of colour. These raw, mixed-media works were often populated by mysterious, archaic figures and symbolically charged imagery inspired by his travels.

One such trip was to the South Pacific, where Nöger discovered the ancient Rongorongo writings; a series of elemental glyphs made up of animals, figures and symbols used by the people of Easter Island centuries ago. Over time, he began to incorporate this ancient iconography into his work, eventually creating his own pictorial language, which gradually became more abstract. At the same time, Nöger began to refine his palette of dark, earthy hues until the colour began to disappear altogether.

By the mid-nineties, Nöger began to focus his attention exclusively on the interaction between light, space and colour, moving away from the more aggressive style of canvasses he was producing in favour of a minimal aesthetic that distilled his concept to its simplest form. His desire to go deeper into his ideas coupled with the boredom he experienced always working on the front of a canvas prompted the artist to go beyond the surface both materially and conceptually.

Nöger experimented with paper at first, creating translucency with mineral oil to see the effects of light on pigment applied to the underside. He then took the idea even further, eventually developing a technique that enabled him to capture, transform and reflect light, seemingly from inside his paintings. What distinguishes Nöger from other artists whose work is based on light is that he engages light itself as a medium.

To produce works that appear to emanate light from within, Nöger employs an almost architectural approach. The paintings comprise three layers of canvas mounted on stretchers set at a distance from one another. The interior canvas, from which the artist cuts out simplified biomorphic forms, functions as the actual pictorial plane. Once the internal composition is complete, the outermost surface is treated with mineral oil to amplify translucency and visually bring the composition to the forefront.

The resulting works are subtle and atmospheric, both in the visual nature of the paintings and in how they interact with the surrounding space-the kind of light, the quality of light, even the time of day can impact the viewing experience. While the paintings are rendered in a restrained palette of soft whites and grays, depending on the light that illuminates the work, faint shades of blue, purple and green can emerge.

Some of the canvases are bisected through the middle, such as Zeit - Fliessend 2. Playing with light, depth and balance, a centralised oval defined by gently curving lines formed from negative space seems to hover just above the surface. Other paintings, such as Gleich Sein, bear distinct gestural patterns that softly echo the primitive markings found in Nöger's earlier works, but here they speak in a wholly contemporary language.

Nöger's endeavour to eliminate visual clutter leaves only the essential elements required to convey information-light, space and form. In doing so, the artist provides a unique sensory experience for the viewer, one in which the intangible becomes material, but what is visible is merely an illusion.

His work is in the permanent collections of The Metropolitan Museum of Art, New York; Museum of Contemporary Art, Denver; Art Institute of Chicago; Bass Museum, Miami; and Haus der Kunst, Munich, among others.

Born in Enger, Westfalen, Germany in 1961. He works between San Diego, Miami, and Geneva.

Sign up to be among the first to know when new exhibitions by Udo Nöger or at Sundaram Tagore Gallery open.