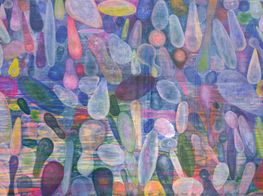 Collectors splurged over HK $2 billion (US $259 million) at Christie's 20th and 21st century art auctions in Hong Kong this week. The result builds on strong fall sales in the city by rival auction houses Phillips and Sotheby's.

'The art market in Asia continues to exhibit strong vibrancy even beyond levels seen prior to the pandemic,' said Evelyn Lin, Co-Head of the 20th and 21st Century Art Department, Christie's Asia Pacific.

Christie's four art auctions this year had a significantly higher sell-through rate of 97%, with 24 artist records shattered along the way.

The standout among Chinese artists was Huang Yuxing, whose Seven Treasure Pines (2016–19) sold for HK$64.8 million ($8.3 million), more than 13 times its high estimate, a record sum for a Chinese artist born after 1970.

Huang's colourful paintings have gained a great deal of momentum in a short period of time.

'Huang Yuxing's name has popped up more and more frequently over the past year, as his eccentric landscapes have caught the eye of collectors globally, and reached record prices at auction,' wrote Ocula Advisor Rory Mitchell back in June.

Sotheby's five fall auctions of modern and contemporary art in Hong Kong brought in HK $1.4 billion (US$185 million), with records set for another 15 artists including Jadé Fadojutimi, Shara Hughes, and Nicolas Party. —[O]