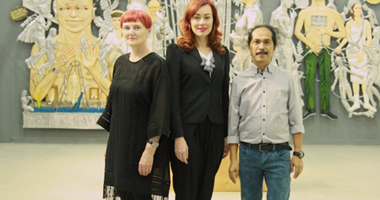 Being one of Indonesia's most provocative and engaging artists, Entang Wiharso his paintings and installations combine personal, Western and Indonesian mythologies and cast a critical eye on International politics, environmental issues and cultural stereotypes and prejudices.

He is indeed drawing on history and mythology from his home culture of Indonesia, while also responding to Western culture and globalisation since making his second home in Rhode island. In his personal experiences are embedded with a strong examination of the predominant socio-political conditions of his home country Indonesia. To him, creating work is a way of understanding the human condition, of heightening our ability to perceive, feel and understand human problems like love, hate, fanaticism, religion, and ideology.

Recently, an increasing use of written text has entered his works: slogans, signs, philosophy or common phrases are collected from newspapers, political campaigns, quotes from important or influential people or characters from TV or films. Used directly or altered by i.e. changing the punch line, underlying meanings are exposed and add a further component to the complex artistic language of his work. His work shows ambiguous profiles, similar to the forms of giants in the myths of Java, and combines them with contemporary elements. He puts together 'primitivism' with a cartoon’s language of his contemporary life, being able to transport primitivism in his actual reality.

'I depict the condition of humans who are often divided by complex, multilayered political, ethnic, racial, and religious systems: they co-exist yet their communication is limited and indirect. Figures are interconnected by intuitive as well as intellectual linkages, including ornamental vegetation, tongues, tails, intestines, animal skin patterns, fences and detailed landscapes.' Entang Wiharso, 2011

Stay Focus, 2011 is part of a series of wall-mounted reliefs entitled 'Comic Book Series'. These works present a variety of scenarios about the pleasures and pitfalls of power. The eye is a metaphor of awareness - our conscious - always watching, recording and reminding us of flawed choices and their repercussions. Sexuality, possession and desire also play important roles in these works and the fence, which frames the figures, alludes to boundaries which differentiate, exclude and protect.

The Possibility of an Island at Cromwell Place brings together works by artists from across Southeast Asia.

The online auction aims to raise funds for the struggling art centre, which is ending its exhibition and residency programmes.

[Jakarta][0] may be sinking, prompting the announcement last month that Indonesia will create a new capital on the island of Borneo, but the city's longest-running art fair is on the rise. Founded by

This year marked the eighth edition of Art Stage Singapore (26–28 January 2018), founded with the goal of bringing together galleries and art from Southeast Asia under the roof of the Marina Bay Sand

When one is new to Jakarta, one makes the mistake of not telling the cab driver to travel via the toll roads. And so it is that while creeping through the city's tight tangled backstreets, the cab fin

Read More
Related Press Art plus: Art as food for your soul 22 August 2016, The Jakarta Post

The eighth edition of the flagship regional event promises to be more diverse and informative than ever before, Fair Director Vivi Yip said. “We aim to connect with a broader public audience,” Vivi said. “Not only will Bazaar Art Jakarta present the artwork of world-class artists from 41 leading galleries from 11 countries...

The latest Singapore Art Museum group exhibition conjures stories of journeys at sea seen through the eyes of some among the most inspirational artists working in the Asia-Pacific region today. Most dictionaries describe the word ‘Odyssey’ as ‘a long and exciting journey’. In the literary world, Odyssey is...

Be among the first to know when new artworks and exhibitions by Entang Wiharso are added to Ocula.
Sign Up Login