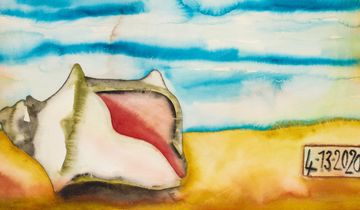 Francesco Clemente's work reflects the influence of diverse cultures, from the artist's birth-country of Italy, where he emerged in the 1970s amidst social and artistic upheaval, to the cities of India that he regularly visited from the mid-1970s and the energetic New York art scene he arrived on in 1980. The subject and style of Clemente's works draw from the contemporary and historical culture of these places, and others including Afghanistan, Egypt, Japan, Brazil, and the Caribbean.

Francesco Clemente's art, which includes sculpture, painting, drawing, photography, and book art, defies easy categorisation. Forsaking his architectural studies at Sapienza University of Rome, Clemente turned to a career in art during the Italian Arte Povera movement's heyday. Though he shared the movement's social and political frustrations, and found a friend and mentor in Art Povera artist Alighiero Boetti, Clemente favoured a contemplative and symbol-laden form of painting over the movement's focus on industrial materials and found objects.

As he rose to prominence, Francesco Clemente became associated with Transavanguardia—an Italian sub-movement of Neo-Expressionism whose other practitioners included Nicolo de Maria, Mimmo Paladino, and Enzo Cucchi. On the 1980s New York scene too, the artist became known as an leading figure of Neo-Expressionism. He collaborated with the likes of Andy Warhol and Jean-Michel Basquiat, while also carving out his own independent style.

Francesco Clemente watercolours, drawings, and paintings are particularly known for their display of expertise in depictions of the human form. In paintings ranging from I (1982) to Napoli É XVI (2018), light and delicate line and colour work comes together to form a surreal atmosphere in which figures seem to float out from the picture plane.

The diversity of the motifs and subjects in Clemente's works reflects the artist's nomadic persona. One can find influences and references to poetry, particularly that of Allen Ginsberg and Robert Creeley; the Tantric arts of India and Tibet; European art history; classical, Hindu and Buddhist literature; and philosophy; amongst other topics.

Francesco Clemente's portraiture efforts from between 1982 and 1987 depict a broad range of well-known figures, including artists such as Keith Haring, writers such as William S. Burroughs, and composers such as Morton Feldman, while more recent subjects have included opera singer Renée Fleming (Renée Fleming as Thais, 2008) and fashion model Anna Ewers (Anna Ewers, 2016). The artist has also painted numerous self-portraits throughout his career.

Francesco Clemente's art continues to develop and transition into new forms. For Encampment—his 2015 installation at MASS MoCA in North Adams, Massachusetts—in an allusion to his reputation as a nomadic artist, Clemente collaborated with artisans in Rajasthan, India, to create a miniature tent city. The six ornately patterned tents in this work contain frescoes the artist hand-painted to reference autobiographical, historical, spiritual, and mythological subjects.

Ocula News This Week: Francesco Clemente, Mystical Trees, and the IFPDA Print Fair Hong Kong, 12 May 2020 The best art to see online and off from Tuesday 12 to Monday 18 May.