Japanese style painter. Born in 1892, Oita prefecture, Japan. After having studied at the Kyoto CitySchool of Arts, he went to Kyoto College of Fine Arts and graduated in 1918. His works were included in Teiten (Imperial Fine Arts Academy Exhibition) several times, and 'Koi' (Carps) received a special commendation in 1921. Fukuda himself later served as a judge. He also served as an executive director and advisor in the Nitten (Japan Fine Arts Exhibition) after the war. He is an awardee of the Order ofCulture in 1961. Fukuda died in 1974 at the age of 82. His works are in museum collections such as Oita Museum, Osaka City Museum of Modern Art, The National Museum of Modern Art, Kyoto, the national Museum of Modern Art, Tokyo, and Yamatane Museum of Art. 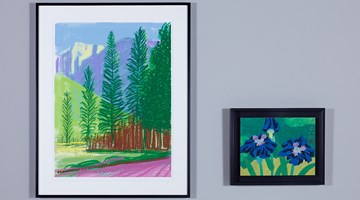 Be among the first to know when new artworks and exhibitions by Heihachiro Fukuda are added to Ocula.