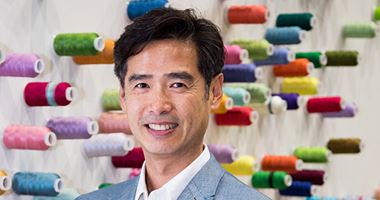 The work of artist Lee Mingwei (李明維) is informed by the legacy of relational aesthetics. He is best known for his participatory installations based around everyday scenarios. Sometimes these installations involve direct and intimate contact with the artist himself in activities such as eating together, walking together or talking together. In such work he fosters a sense of trust, intimacy and self-awareness between the viewer and the gallery attendant (or artist), transforming the interaction between gallery-goer and art into a human moment between two people.

Lee is perhaps best known for Sonic Blossom (2013-present). For this work, first exhibited at the National Museum of Modern and Contemporary Art, Korea, a singer meanders through the gallery, eventually approaching a visitor and asking, 'May I give you a gift?'. Upon the visitor's acceptance of this request, the gallery performer sings to the visitor one of five lieder by Franz Schubert. The action sometimes led to very emotional exchanges. In an interview with Ocula Magazine in 2015, Lee said of the process, 'the receiver might start tearing up, sometimes it has affected the singer so much that they couldn't' finish the song.' In works such as this, Lee utilises generosity as a method of provoking intimacy within a white cube environment typically absent of such feelings.

The framework Lee devises for his projects often stems from his personal experiences. Before the Twin Towers fell, Lee's partner worked in the north tower. For five hours after the buildings were attacked, Lee thought his partner was dead. Lee went home and pulled out all their clothing that needed to be repaired and started mending items. This was the inspiration for The Mending Project (2009). In The Mending Project, a gallery docent or the artist himself sits at a table in the gallery. The visitor brings a piece of clothing and sits on the other side of the table. The helper mends the clothing in a colour of the visitor's choice. The clothes are left attached to the spools of thread they were mended with and remain in the gallery until the end of the exhibition. As the clothes accumulate, the visitor becomes aware of the presence of a shared humanity between themselves and the other visitors—material existences and relationships that are built and repaired through time.

Lee's works do not only act generously toward the visitor, they also invite the visitor to be generous. In The Moving Garden (2009)—First created for La Biennale de Lyon—Lee provides colourful and fresh flowers and invites visitors to take a flower on two conditions: that they take a detour from their intended route away from the museum, and that they give it to a stranger who they felt would benefit from an unexpected act of kindness. Lee told Ocula Magazine, '...when you give something to a stranger it's seemingly a very easy gesture, but actually it's hard and full of different nuances.' In works such as The Mending Project, Lee challenges himself and the gallery docents to these acts of generosity, while in The Moving Garden, the challenge is put to the audience members themselves.

Lee received his MFA from Yale University in 1997. He lives and works between Paris and New York.

I think this biennial is a lot about the in-between space... the crack between the physical and the digital

Presented by the Asia Contemporary Art Consortium (ACAC), it brings together 150 artists, curators, and writers in collaboration with around 40 institutions, both Asia and New York-based, from the 28th October to the 8th November.

Lee Mingwei is known for his participatory projects, which often engage audiences as collaborators, be it in a personal, one-to-one type of experience or via an open invitation to a general public. Th

Held over nine sites and including 33 artists, the first edition of the Honolulu Biennial takes place between 8 March and 8 May 2017. Entitled Middle of Now | Here, the Biennial challenges the idea

From 5 November 2016 to 19 March 2017 Auckland Art Gallery Toi o Tāmaki hosts the exhibition Lee Mingwei and His Relations: The Art of Participation, the first large-scale retrospective survey of th

A case can be made that the Shanghai Biennale, widely regarded as a perfunctory affair, too disorganized and lackluster to justify its existence, now has the potential to intelligently introduce inter

Guernica in Sand is a recreation of Picasso’s famous painting Guernica (1937) through the medium of sand. The public is then invited to engage with the work by walking on it, in a painstaking performance that Lee says is “about transformation”: "I’m going to finish the last part of the sand painting, while one...

Be among the first to know when new artworks and exhibitions by Lee Mingwei are added to Ocula.
Sign UpLogin