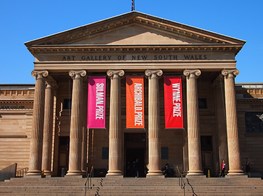 The new commission is a standout feature of the Sydney Modern Project, an AU $344 million dollar expansion to the Art Gallery of New South Wales (AGNSW) that opens on 3 December.

The lingering smell of oil, haunting acoustics, and disorienting darkness assault the senses when descending the spiral staircase to the lowest level of the new Sydney Modern Project building.

The Nelson Packer Tank is Sydney Modern Project's underground exhibition space, housed within a repurposed World War Two naval fuel tank. Ben Franklin, New South Wales' Minister for the Arts and Tourism, described it as what 'will be one of the most important exhibition spaces in the world', a space to rival Tate Modern's Turbine Hall or New York's Guggenheim.

Justin Paton, AGNSW's head curator of international art, described the Tank as 'a gift and a challenge to artists'.

When Paton first visited the space in 2017, he noticed 'a profound echo, extraordinary acoustics; there was the remarkable patina, where oil had soaked into the walls of this 1942 fuel bunker across many decades.'

'Strange life forms in the space, such as tree roots that had grown down from above—gave an incredible sense of wayward organic life,' Paton said.

Argentine-Peruvian artist Adrián Villar Rojas is the inaugural artist commissioned for the Tank. Titled The End of Imagination, Villar Rojas' exhibition has been four years in the making, with the artist first visiting the site in 2018, before the commencement of Sydney Modern construction in November 2019.

'Justin and I always wanted to retain and share with the audience that early experience of the space with its darkness and layered histories,' Villar Rojas said. He noted that while he has five sculptural forms in the space, there is also a sixth sculpture: the Tank itself.

'You are accessing a full-on environmental experience, a bodily experience,' he said. 'You have to commit to navigating the space. It's a very physical journey.'

The monumental abstract sculptures are interspersed throughout the 2,200-square-metre space amidst the Tank's concrete columns, of which there are over 100 stretching seven metres from floor to ceiling. With lighting periodically shifting and changing in brightness—from floodlight-intensity to pitch blackness—Villar Rojas' work demands viewers spend time progressively navigating the space in order to take in the composite details of his sculptures.

Villar Rojas described the chance to exhibit in such an unusual space as 'a very unique, fragile moment'.

'It is a unique opportunity because no one knows the space,' he said. 'We wanted to slowly reveal it, and the objects that live in there.'

While The End of Imagination runs to mid-2023, Paton is already excited for the next commission.

'The Tank is like a huge instrument that each artist is going to play differently—it's thrilling to have Adrian's project in there, and also to think about what an artist who works with sound, or video, or performance, might do with the space,' he said.

The Tank sits in stark contrast to the openness and transparency of the wider Sydney Modern building, which is designed by Kazuyo Sejima and Ryue Nishizawa of Tokyo-based architecture studio SANAA.

Overlooking Woolloomooloo Bay, the new standalone building is connected externally to the existing 19th-century neoclassical AGNSW building through an art garden. It increases the footprint of AGNSW from 9,000 to 16,000 square metres. 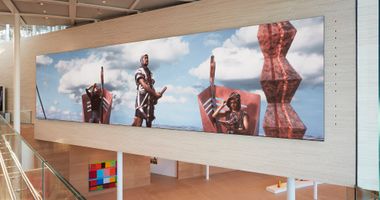 Some 14,000 visitors have already registered to be among the first to explore the gallery, which will have extended opening hours for its first nine days of opening celebrations beginning 3 December.

'It's very important that it starts with the work of Genevieve Grieves, a New South Wales Indigenous artist, and to have Indigenous art and voices throughout the campus—in the existing building, landscape, contemporary spaces—everywhere,' said AGNSW director Dr Michael Brand.

Visible from inside and outside at both day and night is Waradgerie artist Lorraine Connelly-Northey's Narrbong-galang (many bags) spans the 20-metre-long loggia. Further exhibitions to be unveiled in the new building include Dreamhome: Stories of Art and Shelter, and Making Worlds, a group exhibition centred around Kimsooja's participatory installation Archive of mind. —[O] 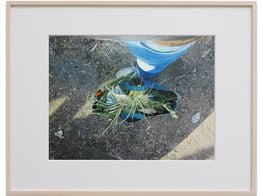 Adrián Villar Rojas was born in Rosario, Argentina, in 1980. Adrián Villar Rojas has been the recipient of numerous awards including The Zurich Art Prize at the Museum Haus Konstruktiv, (2013); the 9th Benesse Prize in the 54th Venice Biennial, 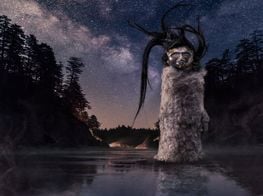 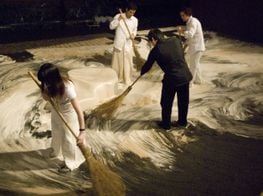 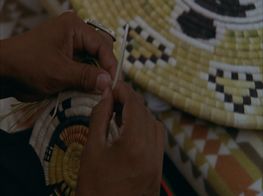 In Kimsooja's videos, performative actions, sculptures, and installations, pieces of daily life become tools of investigation into the diverse yet shared experiences of humanity. Particularly known for her use of Korean bedcovers and fabrics to