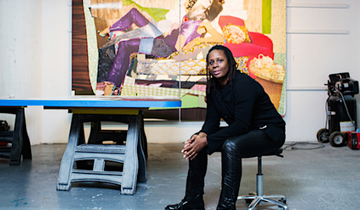 Producing striking portraits of figures such as Michelle Obama and Solange Knowles, multidisciplinary Brooklyn artist Mickalene Thomas is known for vibrant and empowering depictions of Black women in lush spaces. She has collaborated with magazines like Vogue, The New York Times Magazine, and Harper's Bazaar on photographic profiles.

Born in New Jersey, Thomas was raised by a single mother, Sandra Bush, affectionately known as Mama Bush. Her glamorous socialite mother, who passed away in 2012, was her first and long-time muse and heavily influences her artwork to this day.

Initially, the artistTs dropped out of high school to elope to Portland with her then girlfriend. A life-changing encounter with a work by Carrie Mae Weems led her to complete high school in Portland, before going on to complete a BFA at New York's Pratt Institute in 2000. Completing an MFA at Yale University School of Art in 2002, Thomas was introduced to photography by David Hilliard, which became the defining medium of her early work.

Mickalene Thomas' art conveys a bold and contemporary sense of female power and sexuality packaged in a vibrant aesthetic. Her visual motifs and thematic explorations of race, gender, and sexuality travel across visual mediums: from photography to Rhinestone encrusted enamel and acrylic paintings, collage to prints, and video to installation.

Photography is an integral component of Thomas' artistic practice. Initially focusing on her mother as a subject in her Yale years, Thomas' sitters have included family, friends, lovers, and influential figures.

With the exception of a few intimate standalone series like 'Black and White Polaroid' (2012), the majority of Mickalene Thomas' photography consists of lively staged group and single portraits. Black women, vibrantly dressed or naked, gaze directly at the viewer in confident poses from pastiches of 1960s to 80s-style domestic interiors.

Thomas builds her painted and collaged works from the vibrant and confident femininity of her photographs. Both formats render these subjects in a patchwork of styles. Fragments of photography, sometimes overpainted, intersect with areas of painting or printed material.

Thomas has also long worked with video and sound as a medium. Early examples from the mid-2000s such as Oh Mickey (2008) and the 'Ain't I a Woman' series (2009) brought her portrait subjects to life, singing or making poses for the camera, against a background of popular songs in screens framed like paintings.

This has matured into multi-channel works such as the intimate black-and-white Je t'aime (2014) and Je t'aime trois (2018), which feature clips of outdoors and interior scenes, influential Black figures, and the artist's mother, as well as footage from civil-rights era and contemporary Black Lives Matter protests.

Brining to life the vibrant staged interiors that are the setting of many of her artworks, Thomas creates immersive room-scale installations that recreate these environments within galleries. Presenting an aesthetic gleaned from 1960s—1980s decor, they often feature artworks, sound elements, and occasionally video.

For Art Basel in 2013 Thomas created Better Days (2013), an immersive environment within the Galerie at Volkshaus evoking the aesthetic of a 1970s house party. Complete with period decor and a cocktail bar, Thomas activated the space with nightly performances by guest DJs and musicians including musician Solange Knowles.

Thomas has created murals for public spaces including at Brooklyn's Barclays Center (2012), Norton Museum of Art in Palm Beach (2013), and the U.S. Embassy in Dakar (2016). In 2016 Thomas also produced a video work featuring influential Black female figures for an electronic billboard with Standard Vision in Los Angeles.

Mickalene Thomas' art has been the subject of both solo exhibition and group exhibitions.

Mickalene Thomas' work has been written about in numerous publications, including important cultural publications such as Brooklyn Rail, and mainstream magazines such as Town & Country, and Vogue.

Read More Ocula Feature The Armory Show: New York Exhibitions to See in 2021 By Elaine YJ Zheng, New York Find out what's happening in New York beyond The Armory Show, which returns to New York from 9 to 12 September 2021.

Advisory Pick Stand-Out Exhibitions in London 19 October 2021 A number of stand-out exhibitions have opened across London.