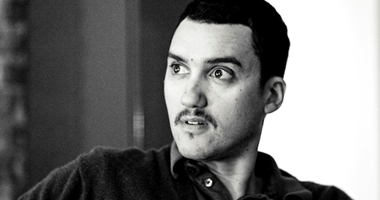 Using materials such as chalk, charcoal, paint, and even soap, Robin Rhode captures complex social conditions in urban murals that he documents through photography and stop-motion animation.

Growing up in post-apartheid South Africa, Robin Rhode was inspired by the youth culture of hip-hop and sports, as well as the narrative quality of mural paintings around him. He began making performative drawings on walls in public spaces in 1997, when he was a student at Technikon Witwatersrand in Johannesburg. In 1998, Rhode began using photography to document his murals; their serial quality reminiscent of early motion photography by pioneers such as Eadweard Muybridge.

Rhode’s narrative murals frequently comment on widespread stereotypes about the young black male through images such as a thief trying to break into a car in Car Theft (1998) or a talented athlete in Street Gym—originally created as a performance in 2000 before being mounted as a digital animation in 2004. By contrast, works such as the stop-motion animation Empty Pockets (2008) depicts a humorous narrative in which people play billiards on a drawing of a pool table, while flowers magically climb up buildings in the city of Jericho in Tree of Life (2019).

In 2015, Robin Rhode combined his propensity for storytelling and performance in Erwartung, which was commissioned for the Performa 15 biennial. The work is a reinterpretation of the eponymous one-act monodrama by the Austrian composer Arnold Schönberg, which tells the story of a woman who looks for her lover in the dark forest. In his interview with Ocula Magazine in 2015, Rhode said that he ‘began to see parallels between the protagonist in Erwartung and the South African women who have also lamented the loss of their men to migration for work, or to political exile, or taken by police into questioning during the struggle of apartheid.’ The powerful performance was staged in collaboration with the conductor Arturo Tamayo and soprano singer Carol Sidney Louis.

Selected exhibitions include Robin Rhode & Nari Ward: Power Wall at Lehmann Maupin Hong Kong (2020); Under the Sun, Tel Aviv Museum of Art (2017); The Moon is Asleep, SCAD Museum of Art, Georgia (2016); and The Call of Walls, National Gallery of Victoria, Melbourne (2013). Robin Rhode: Memory is the Weapon, a survey exhibition of Robin Rhode’s work to date, was held at Kunstmuseum Wolfsburg, Germany (2019), and Kunsthalle Krems, Austria (2020).

Robin Rhode is based in Berlin.

I always want to create situations that are groundbreaking and cutting edge and a little bit risky. This is what contemporary artists have to do, take risks and push boundaries.

This spring, Africa arrives in New York. The city will be treated to an unprecedented opportunity to observe and experience a wide range of contemporary art from Africa and the Diaspora, sparked by the Armory Show’s focus on the region. Satellite fairs, performances, pop-up shows, museum and gallery exhibitions featuring contemporary African...

For the Performa 15 biennale, the South African artist Robin Rhode has chosen a demanding venue to stage a performance: in the thick of Times Square. This Saturday and Sunday, Rhode will reinterpret the Austrian composer Arnold Schönberg’s operatic monodrama Erwartung  in the middle of the bustling tourist hub — a project that...

Cape Town-born and Berlin-based multidisciplinary artist Robin Rhode works across visual media to interrogate notions of the city and urban landscapes, the individual, and the cultural collective. Rhode was recently announced as a commissioned artist for Performa 15, the biennial of performance art, taking place in New York November 1–22...

For the South African artist Robin Rhode, drawing is never enough. He draws on gallery walls, then throws his body against the images he’s made, or drags his hands through the fresh chalk or charcoal. He draws in public places, in choreographed acts or in improvised, highly physical exertions. Drawing is not a stand-alone artistic medium; it...

Sign up to be notified when new artworks and exhibitions by Robin Rhode are added to Ocula.
Sign Up Login