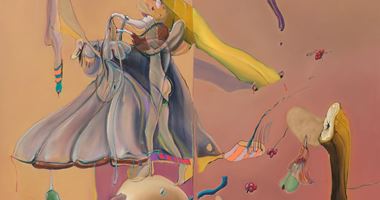 Seth Price is a conceptual artist and writer whose multidisciplinary practice centres on modes of production, distribution, and communication, the impact of digital technology, and how the market ascribes meaning to art. He has participated in the Whitney Biennial (2002, 2008), the 54th Venice Biennale (2011), and dOCUMENTA (13) (2012).

Price was born in the village of Sheikh Jarrah in East Jerusalem, where he lived until he was two years old. He then moved to Boston, Massachusetts, where he attended Brookline public schools, before later attending Brown University, where he received his BA in 1998. Since the early 2000s, the artist has delivered lectures at a number of universities, including MIT and Harvard University. Price lives and works in New York City.

Seth Price's experiments with materials are conducted through a wide range of media, including video, film, sculpture, installation, collage, and text, investigating how art and media are produced and distributed.

Strategies of dissemination form the point of departure for Price's seminal artwork. Dispersion (2002), which takes the form of an essay, calls on artists to find new ways of harnessing the capacity for meaning-making inherent in communications networks. Widely circulated, Dispersion has been translated into seven languages and remixed in a variety of ways, including a 'Cult Classic' version from Burn Rate Berlin, which includes quotes from hip hop's enfant terrible, Kanye West.

Signature works also include his 'Vintage Bomber' (2005—2008) series, comprised of sheets of vacuum-formed polystyrene bearing the traces of bomber jackets moulded in metallic plastic, and the 'infinite' video essay, Redistribution (2008—ongoing), a surreal, meandering narrative that questions art world conventions and our relationship to the circulation of images, while also serving as a living document of Price's work and process.

Price has been described by artist, editor, writer, and filmmaker Emmanuel Olunkwa as a 'compressionist': someone who 'processes the world by collecting its varying shapes and colours' and produces objects or experiences that experiment with the intended function of their material or technology.

Since the beginning of his career in the early 2000s, Price has resisted categorisation and continues to explore diverse mediums from electronic music and fashion to computer screensavers and philosophical essays.

Writing has always been central to Price's practice, and he has published a number of books. His 2015 novella, Fuck Seth Price—a fictional essay-memoir hybrid in which the artist muses about the role of creatives in an increasingly digital world—serves as a companion piece to Price's online database, Organic Software (2015). Comprised of an 'algorithmic perception tool' that publishes information on art collectors and their political donation history, Organic Software is in line with the wave of conceptual art rooted in technology dubbed 'art hacktivism'.

Sign up to be notified when new artworks and exhibitions by Seth Price are added to Ocula.
Sign UpLogin