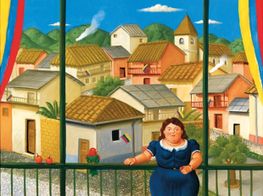 Living With Botero presents plump paintings, drawings, and sculptures in the gallery's new Tai-kwun space, which has been styled to resemble his apartment in New York.

They include the homage to Vincent van Gogh, Sunflowers (1977), and a number of works that Botero has hung at his own residences. Snake (1979) was previously displayed in the artist's home in Colombia while Woman in the Bathroom (2002) hung in his New York apartment.

Despite growing up in South America, Botero enjoys a strong following among collectors in China and Southeast Asia.

'Specifically with China in mind, I give tremendous credit to the Botero in China exhibitions curated by Janet Fong in 2015, which brought his works to the country for the first time,' said Ora-Ora co-founder Henrietta Tsui-Leung.

That exhibition series presented sculptures on the Hong Kong harbour front as well as paintings and drawings at the National Museum of China in Beijing and the China Art Museum of Shanghai, the 63-metre-tall red pavilion built for the World Expo in 2010.

Botero's curvy aesthetic, inspired by Latin American Folk Art, resonates in the region, where many collectors favour works by purveyors of cuteness such as Liu Ye, Yoshitomo Nara, and Ayako Rokkaku.

'Coincidentally we also work with sculptor Xu Hongfei, whose Chubby Ladies series has been so popular globally,' Tsui-Leung said. 'With each, there is a sense of weightlessness, imminent potential and the fulfilling of dreams.'

Ora-ora is presenting Botero as both an artist and a brand. Merch including posters, notebooks and tote bags are being sold as part of the exhibition. —[O]