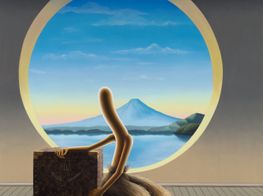 Phillips and Poly Auction set new records for 17 artists in day and evening sales that brought in a combined total of US $90.4 million this week.

The most lucrative work in the 20th Century & Contemporary & Design Sales was Yoshitomo Nara's Missing in Action (2000), which sold for $16 million, the second highest price Nara has ever fetched at auction, ahead of Gerhard Richter's Abstraktes Bild (940-7) (2015), pictured above, which realised $12 million.

Mae Smith, who grew up in Austin, Texas, and now lives in Brooklyn, New York, often paints an anthropomorphised broomstick inspired by the bewitched brooms in Disney's Fantasia (1940).

Phillips attributed the success of the sale to a live auction experience that saw bidders in auction rooms in Hong Kong and Beijing, phone bidders, and 800 online bidders participate simultaneously. The number of online bidders doubled from last season.

'The brand new format of these dual-location sales was the most remarkable, with intense bidding wars from both live auction rooms and phone banks in Hong Kong and Beijing, confirming the strength of Asian buyers in building global demand for the modern and contemporary art category,' said Jonathan Crockett, Phillips' Asia chairman.

Phillips and Poly Auction first collaborated on an auction in 2020, and both parties seem happy with the relationship.