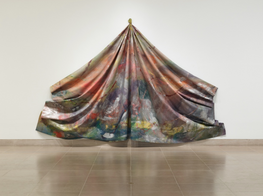 The show at Pace Gallery is Gilliam's first ever solo exhibition in Asia.

The nine new paintings look white from a distance, but on closer inspection reveal scratches of bright colours built up in layers of acrylic, which he sometimes mixes with sawdust, tin shot, and other materials.

In a video interview with Arne Glimcher, who founded Pace in 1960, Gilliam said he sometimes uses a garden rake on the canvases 'because you can swirl the surface' or 'dig deep and pull other undercolours into the surface'.

The exhibition at Pace is the 87-year-old artist's first solo exhibition in Asia. That's surprising for a painter whose practice—which is often gestural and has long included works in ink on paper—seems so well-suited to Asian art audiences.

'Most of the Western artists that have been introduced in Korea have been through blockbuster-scale exhibitions of artists that are already well known to the mainstream public by name, which explains why there has been a lack of institutional interest in Sam Gilliam before now,' said Youngjoo Lee, Pace's senior director in Seoul.

Lee said there were indeed commonalities between Gilliam's practice and traditions in Korean contemporary art.

'His watercolor works have become a topic of conversation for Koreans as they find a lot of connection with the tie-dye technique popular here in the 1980s, and there is of course a similarity between the Washi he uses and Korean traditional paper,' she said.

The Sam Gilliam exhibition is Pace's first in its new Seoul gallery, which is quadruple the size of their previous space. In addition to nine paintings by Gilliam, a sculpture by Joel Shapiro is currently showing on the outdoor terrace. Shapiro will be the second artist to have a solo show at the Seoul gallery.

The Sam Gilliam exhibition ends on 10 July, and will then travel to Pace's Hong Kong gallery.

A major retrospective of Gilliam's work will open at the Smithsonian's Hirshhorn Museum and Sculpture Garden, Washington D.C., in Spring 2022. —[O]