The large-scale installation consists of 63 stainless steel bamboo canes, each of which contains tubes pulsing with thermochromic ink. Commonly used for anti-counterfeiting such as banknote printing, the ink is sensitive to temperature and shifts colour or disappears when exposed to heat.

XCEPT, the artist collective and multimedia studio founded by Cheung in 2008, engineered the flows of ink so that they describe the carbon emission data from the National Oceanic Atmospheric Administration (NOAA).

According to the report the NOAA released in April, the global average of CO2 in the atmosphere had increased from 409.9 to 412.5 parts per million (ppm) during the year 2020. This reflects a steady increase since 1958, when the NOAA first began taking measurements.

Climate change has resounding effects around the world, from more extreme weathers to rising sea levels and melting glaciers. In Hong Kong, the sea level in Victoria Harbour had risen at a rate of 3 centimetres per decade between 1954 and 2017.

Ink Reveries manifests the undeniable impact of human activity on the increasingly warm earth. Visitors can walk in a bamboo forest and touch the steel canes: the heat from their palms influence the disappearance and reappearance of the ink.

The interactive components of Cheung's Ink Reveries makes information literally palpable, using it as the material to form works that invite audiences to acknowledge the sense of reality of an environmental crisis. RadiancesScape, another data installation first presented at New Vision Arts Festival in 2014, portrays the live radiation data from major cities around the world in comparison to Chernobyl and Fukushima in a series of lights, cityscapes, and ambient sounds.

Ink Reveries was commissioned by UOB, which is the Lead Partner for Art Central. Christine IP, CEO – Greater China of UOB, said the partnership builds on art and cultural engagement programmes in Hong Kong through the UOB Art Academy, as the Bank is committed 'to forging a sustainable future' from 'a cultural perspective'.

It was in the spirit of nurturing local artists that UOB commissioned Cheung 'to create Ink Reveries to encourage conversations on sustainability,' she said.

Cheung, known for his mesmerising installations that combine new technology with traditional media, was the winner of the 2019 UOB Art in Ink Awards organised by UOB Hong Kong. His winning work, InkFlux (2019), similarly employs thermochromic ink: this time an installation mounted on the wall portraying a live black and white landscape whose movements are dictated by metal disks. Recently, InkFlux was selected for the 24th Japan Media Arts Festival.

Approaching the traditional medium of Chinese ink painting with contemporary technology, Cheung wanted to explore the notions in Zen philosophy 'neither arriving nor departing', as he said in an interview with the UOB Art Academy—both in form and concept.

In No Longer Write – Mochiji (2019), an AI generates new styles of calligraphy by studying works by historical Chinese masters and participants. The results, rendered in white characters, appear to ripple in the immersive black screens—a reference to the Jin-dynasty calligrapher Wang Xizhi, who turned a pond black from washing the ink of his brushes. It symbolised the disappearance of calligraphy style as the newly generated script is non-readable by humans.

First shown in the group exhibition Play with Ink & Brush — Calligraphy Art Experience at Taoyuan Museum of Fine Arts, Taiwan, in 2019, Mochiji has traveled to Lisbon's New Art Fest in 2020 and is currently part of Man-Made: The Convergence of Chinese Culture and Modern Technology at HKSTP Experience Centre until April 2022.

The years leading up to and after the UOB Art in Ink Awards have been prolific for Cheung. In addition to XCEPT, he founded the artist's collective XCEED in 2008, followed by the research- and education-based XPLOR Lab in 2017.

It is at this junction of education, to support and nurture the future, that Cheung finds another synergy with the UOB Art Academy. Since 2015 in Hong Kong, UOB Art Academy has been holding annual art competitions to support local artists locally and internationally. The UOB Art in Ink Awards accepts submissions from Hong Kong residents, aged 9 or above, and the winners receive a total of more than HK $330,000 including cash awards and artist-in-residency programme.

The submission for 2021 UOB Art in Ink Awards is currently open till 12 September 2021 at www.UOBArtAcademy.com.hk. 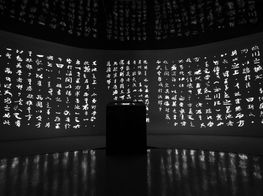 Chris Cheung Hon Him (aka h0nh1m; b.1983) is best known for installation art and audiovisual performance, whose artistic expression depends upon electronic, sound, image and creative technology innew media. h0nh1m's reverence for Eastern and