Ellen Lesperance's intricate grid paintings are a familiar sight to knitters. Since 2005, the Portland-based artist has been singling out sweater designs from archival photographs of protesters, rendering them as knitting patterns in gouache on tea-stained paper.

It all began at a commune outside of Santa Fe, where the artist encountered a woman named Nic who had attended the Greenham Common Women's peace camp in Berkshire, England, in 1980—a site of anti-nuclear protest in response to NATO's decision to house operational cruise missiles and nuclear warheads at the commons.

Since then, Lesperance has amassed a vast archive of imagery related to the protests, and the work continues to be developed with each new sweater design she comes upon. Previously, the artist would knit the sweaters, too—a process that pulled them even more into the present. Yet she has recently eschewed this approach, for risk of their being stored away into dormancy if not exhibited.

Knitwear made and designed by Juley Howard for Anne Gilholy, worn by her daughter Dina Gilholy at Greenham Common (c. 1987). Courtesy Juley Howard.

By drawing attention to these sweaters, Lesperance forms an act of commemoration, but it is also a means of re-thinking the female figure. Lesperance began her art career in a painting programme at Washington University, where she received her BFA in 1995, studying under an almost entirely male faculty. Frustrated with the patriarchal conventions of representation, she turned to knitting, which she had been taught by her grandmother in her early twenties.

The sweaters also provided her with protection. Driving a bus during her twenties in Seattle to make a living, she recounts having been harassed on the routes she was assigned.

Worn under her uniform, her sweaters' reliable grids manifested as courage and protection—qualities adopted by the protestors of Berkshire, who incorporated protest language into their sweaters as one of their many methods of creative direct action.

In Congratulations and Celebrations (2015–ongoing), Lesperance further catalysed courage. Begun in 2015, the project involves a sweater bearing a labrys battle axe—a symbol of feminist and lesbian strength—that can be worn by participants as they perform their own acts of courage.

Through such acts, Lesperance not only brings the past into the present; she extends them ever further so that they 'resound in a louder way'.

With its very own Instagram page, the sweater has been circulated and worn for public speaking, overcoming negative self-talk, initiating difficult conversations, and completing university projects, though it is currently on pause during Covid-19.

Graduating from her MFA in 1999 from Rutgers University in New York, where she studied under feminist artists such as Judith Brodksy and Martha Rosler, Lesperance began her trajectory as an artist by proofing and testing knitting patterns for Vogue Knitting.

Unsatisfied with the pragmatics of the job, Lesperance accepted a teaching job at Maine College for seven years, before she decided to leave everything behind and start anew in Seattle.

Since her encounter with Nic in 2005, her archive has spread into new directions. In 2010, Lesperance retraced the steps of Italian artist Pippa Bacca, who travelled the world meeting midwives of small villages, washing their feet, but was devastatingly killed while in transit in Turkey in 2008.

Beginning in Milan, Lesperance made Bacca's same journey, collecting dyestuffs from each location, among them tea, spices, and copper, a 'saddener' in pigment terms, for its ability to darken colours. With these pigments, Lesperance rendered a painting of a bouquet by Giorgio Morandi in a set of seven grid paintings, their colours shifting based on the dyes used from each locale (Dear Pippa Bacca, 2011–2012).

Through such acts, Lesperance not only brings the past into the present; she extends them ever further so that they 'resound in a louder way'. Metaphor is an important element of her practice, as with her installation for the 2014 Portland Biennial, where sweater paintings were placed atop a wall covered in banners of treated silk, recalling burial shrouds. 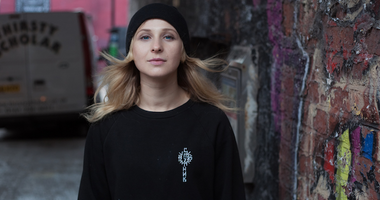 Using a traditional Japanese dying technique that requires protein, she soaked the silk in soy milk, wrapping bouquets of flowers in their folds before burying them. Through the heat of fermentation, colour leaked into the silk to create swirling stains. At the centre of the room, a set of figurines inspired by tanagras—terracottas found in the graves of ancient women and children—took the form of Amazons and members of FEMEN and Pussy Riot.

Following announcement of her representation by London's Hollybush Gardens, the artist's first solo exhibition at the gallery, Will There Be Womanly Times?, runs between 1 and 31 July 2021. Included are a new series of works on paper, drawn from her Greenham Common project, alongside knitted sweaters and a slideshow of archival imagery relating to the project.

Protest against the Corrie Amendment to the 1967 Abortion Act in the United Kingdom. Courtesy Janine Wiedel.

Representing the artist's first U.K. solo show, the motif of the rainbow will recur throughout. A favoured subject of the Greenham knitters, the rainbow both speaks to the 1980s emergence of the LGBTQ pride symbol, as well as its most recent use as a harbinger of hope, acting as a bridge between Lesperance's historical research and current political, health, and environmental crises, while offering courage to confront them. —[O]

All interesting situations start with questions because without questions we don't have any way forward. So I like questions. That's how I think my story started. 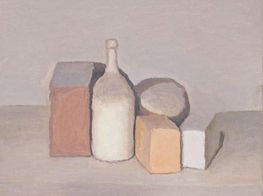 Italian artist Giorgio Morandi is celebrated for his dreamlike still life and landscape paintings made in an impressionist style. In 1948 he was awarded first prize for painting at Venice Biennale and in 1957 he won the grand prize in São Paulo 's