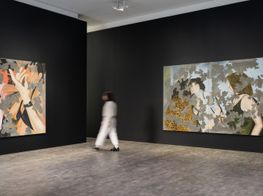 With her distinct, stripped-down visual lexicon, Latifa Echakhch's work examines the textures of time, collective experience, and the resonant power of historical and mythological symbols.

The economy of her formal language is evident in the repeated materials, symbols, and techniques that recur throughout her practice, deployed as poetic signifiers with the power to traverse identity and time.

The function of objects as vehicles of transpersonal memory was perhaps most palpable in L'air du temps, Echakhch's solo exhibition at the Centre Pompidou in Paris (8 October 2014–26 January 2015), in which she assembled a variety of objects dipped in Indian ink among a series of stage-like cutouts of clouds suspended from the ceiling, hanging low to the ground.

The objects, which included a suitcase, boxes of records, and a perfume bottle filled with ink, drew from an explicitly personal source—Echakhch's early migration from Morocco to France at the age of three in 1977—but carry an indubitably collective resonance.

The potential of everyday objects to carry associations that speak deeply to individual experience while transcending the personal is at the heart of Echakhch's practice. Her symbolic language delineates a kind of poetics of history, visualising an atemporal zone of memory and collective experience. 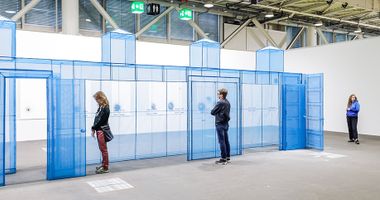 This oblique resonance is also evident in the artist's solo exhibition Screen Shot at Zürich's Museum Haus Konstruktiv (29 October 2015–31 January 2016). Like L'air du temps, Echakhch presented a stage set of memory, but one in which the artifice of its design emphasised a sense of abandonment, displacement, and ruin.

The exposed beams, collapsed trusses, and fallen stage sets are all signifiers of an 'afterwards', the traces—both physical and emotional—that remain after an event has taken place.

The primary installation saw a labyrinth of canvas screens, atop which were strewn clothes soaked, again, in Indian ink—a liquid that both records and erases in the totality of its blackness. The exhibition also featured La dépossession (2014), a fallen stage backdrop depicting clouds against a blue sky, later restaged at Art Basel Hong Kong in 2019 as a striking image of promise and collapse.

Alluding to states of passage, interruption, and undress, Screen Shot again points to migrant histories—here, to the European migrant crisis of 2015, while exemplifying the role of theatrical apparatuses in Echakhch's practice as a form of contemporary ruin.

Moreover, the theatrical structures that recur throughout Echakhch's work express the artist's interest in the specific temporality of ruin, particularly as it pertains to the notion of 'the event'. The exposed beams, collapsed trusses, and fallen stage sets are all signifiers of an 'afterwards', the traces—both physical and emotional—that remain after an event has taken place.

Echakhch's paintings equally draw out this focus on time's passage, many of them executed with a deconstructive fresco technique that involves painting over a layer of concrete before scraping the image away—again, leaving exposed swathes of grey, textured substrate.

In series such as 'Sun Set Down' (2020–2021) or 'Underneath' (2017), Echakhch depicts romantic sunsets and skies, but the reductive act of chipping away at the images draws viewers' focus instead to the voids in between their projections. Sitting between figuration and abstraction, the paintings represent not an image but a kind of afterimage. 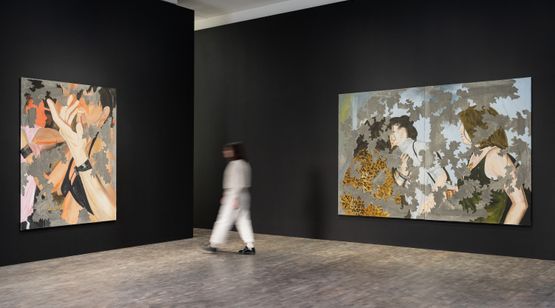 This multi-temporality is also present in Echakhch's debut exhibition at Pace Gallery in London, Night Time (26 March–4 May 2022), featuring a suite of paintings made using the same technique.

But where Echakhch's practice previously delineated moments through their absence, the paintings in Night Time are characterised by an emphasis on human presence, prompted by pandemic isolation and the absence of physical contact, marking a new focus on figuration in Echakhch's work. 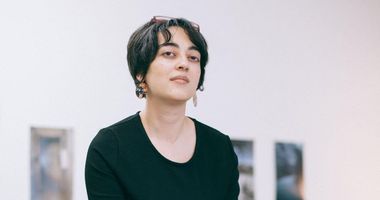 Based off photographs by Sim Ouch of mutual friends on nights out, which appealed to the artist for their intimate and non-invasive quality, the paintings encapsulate the energy of bodies immersed in states of enjoyment and release, just as they are seized within the time-arresting quality of the fresco.

'​​I wanted to convey the nuances within life and express them simultaneously by working both the image and its alterations,' Echakhch says, 'These can be happy memories of gathering, but there is always something underneath.'

Accordingly, the darkened walls of the room in which the paintings are displayed prevent them from being relegated to the past alone; the theatrical staging recreates the nighttime conditions at the heart of the show, enlisting viewers as participants in a continuous rehearsal of an atemporal event—a space in which a feeling of presence assumes centre stage. 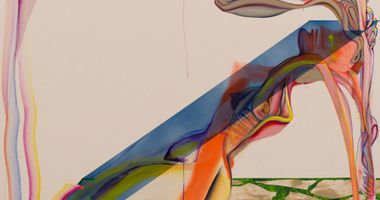 Expanding on these paintings is Echakhch's presentation for the Swiss Pavilion at the 59th Venice Biennale in 2022, which extends notions of ritual and encounter by emulating the experience of leaving a concert, an event that, according to Echakhch, leaves viewers' heartbeats 'transformed, more calm, more intense'.

Drawing out an embodied and affective experience of time, the immersive installation will lead viewers through a counterclockwise journey through the pavilion in increasing darkness, where viewers encounter folk-inspired sculptures and remnants gathered from previous Biennales. 'As audiences walk through the installation, the individual disappears within the collective,' Echakhch says, 'like memory, what is left behind is an impression'.

As with Night Time at Pace Gallery, Echakhch's Venice intervention focuses on the palpable spatial affect of ritualised gatherings. Enacting the rhythms of a collective rite, Echakhch demonstrates that what comes 'after' is not a void, but another space. —[O] 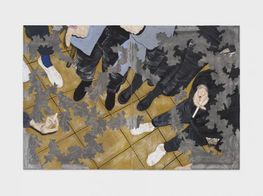 Pace Gallery is pleased to announce a solo exhibition of Moroccan-born, Swiss-based artist, Latifa Echakhch. This exhibition coincides with her representation of Switzerland at the 59 th Venice Biennale, underscoring this landmark moment in her