Fantasy and Foreboding at Esther Schipper 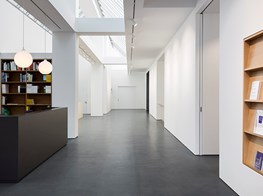 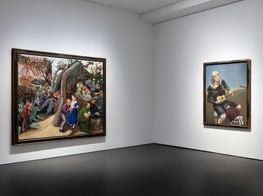 Full of disquieting, surrealistic imagery, the exhibition's title draws on a poem from Charles Baudelaire's Les Fleurs du Mal, which describes a faraway place perceived through a dream-like state.

Opening this intergenerational display is a painting of a closed piano beneath signage reading 'Bar' by Almut Heise (Bar, 1970)—one of three by the artist featuring 1960s and 70s interiors, as with Großes Wohnzimmer (Large living room) (1968), whose mid-century furniture signals a post-war revival through the remaking of urban and interior environments.

The closed piano in Bar signals a performance yet to begin—a stillness reflected in a more recent painting by Heise in the exhibition's first room. Schaufenster (Store window) (2016), features an elegantly dressed mannequin, whose profile is turned towards a section of de Chirico's painting Mystery and melancholy of a street (1948).

The artist describes the visible detail of de Chirico's painting, a child playing with a hoop across a sunlit landscape, as a portal through which she looks back on her younger years—even if the figure in the painting, portrayed without arms, suggests an inability to connect to the past.

Schaufenster suggests the beginning of the exhibition's surrealistic forays, which take a deep dive in three surrounding paintings by Portuguese artist Paula Rego, portraying relationships between adults and children that are deeply unsettling.

In Olga (2003), a child sits bent over at the bottom of the frame, their head nestled in between the legs of an androgynous protagonist playing the guitar—as if signalling the return to the womb, or something more sinister.

Such instances in the exhibition's curatorial vision feel purposeful, if somewhat forced in their ambiguity, bringing viewers off track from works that are otherwise lulling in their fantastical imagery.

Rego's Caritas (1993), measuring two by almost two and a half metres, is a clear example of this, portraying paired individuals engaging in caresses with a man shown suckling a woman's breast in the foreground, with Rego having staged the composition using different members of her family to show seemingly dysfunctional relationships.

Exiting this grotesque circus, the following room presents a selection of paintings reflecting on cultural identities and travel, or the inability to do so. 20th-century German Dada artist Hannah Höch portrays journeys made before and after the Second World War, including three watercolour and pencil paintings of Brittany's Belle Île, painted in 1925.

In a later painting, Aus dem blühenden Tal (From the blooming valley) (1937), the artist rendered an exquisite floral vista from observations made in her garden and travels in Germany.

The fluid shift between personal freedoms and struggle is extended in Leiko Ikemura's reinterpretation of Edo-period printmaker Hiroshige's depictions of the landscape along the Tokaido Road from Edo (modern-day Tokyo) to Kyoto. In her two paintings on unprimed burlap titled Tokaido and Genesis (both 2015), a swooping path with a skull at its tip seemingly references the course of life and its inevitable circularity. 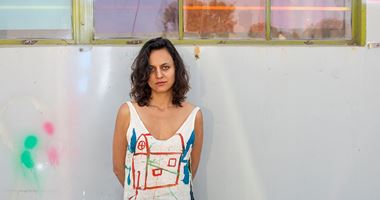 Paintings in the fourth room project stations of distress and trauma inevitable along this course. Veering off Ikemura's meditative path is Tsai Yi-Ting's post-natal Newborn, Confinement no.2 (2017), framing a gaunt figure in a blood-red room, its satin-like interior recalling the womb, while Tala Madani's Untitled (2020) shows a figure pinning another down with an immense pair of testicles, eyes covering hands in shame.

The experience of loneliness—a by-product of shame—is launched into orbit in painter Cui Jie's International Space Station, (2019), showing a lone satellite floating across a dark expanse of acrylic and spray paint on canvas.

In an earthlier portrayal of remoteness, Isa Melsheimer's pair of gouache on paper paintings show empty, derelict brutalist architectures. Nr. 473 depicts the rotating Villa Girasole near Verona, conceived by architect Angelo Invernizzi to be able to turn towards the sun, while Nr. 472 (both 2021) sees a lone wolf lurking in the foreground of a Brutalist church in Rome.

Yeesookyung's Past Life Regression Painting – Just Started (2014) is placed at the exit of the exhibition. Filled with layers of pink blossom, the painting reveals thin thorny branches and a delicate hand at the bottom right-hand corner, fingers pointing upwards alongside curling flames.

Having worked with a hypnotherapist to uncover memories of past lives and incorporating these visions into a series of meditative paintings, Yeesookyung charts the undulating associations that might appear in a state of trance—a braiding of fantasy and foreboding that this exhibition reaches. —[O]

The long history of momentarily escaping the constraints of a fraught reality by travelling to distant lands in your imagination, through fantasy or dreams, is the subject of L'Invitation au voyage, an exhibition of painting that spans multiple 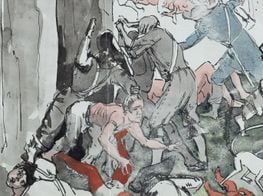 Dame Paula Rego is a London-based Portuguese visual artist who is celebrated for her influence on modern figurative painting in Britain and Portugal. Her contemporary paintings and prints convey feminist counter-narratives interlaced with references