Tomoko Kashiki's surreal and dream-like paintings are reminiscent of the aesthetic of Buddhist paintings from the Heian period, named after Kyoto's former incarnation as the capital city Heian-kyō, where Kashiki was born, and where she attained her BA, MFA, and PhD in painting from the Kyoto City University of Arts.

Kashiki's paintings also reference a classic genre known as Bijin-ga, which translates to 'pictures of beautiful people'—in the ukiyo-e tradition, commonly the courtesans of Japan's ukiyo or 'floating world' pleasure districts. In Kashiki's contemporary renderings, floating worlds and enigmatic outliers are coaxed into the present, carrying echoes and overlays of the centuries with them.

Of the seven recent paintings composing Some of the Many Things That I Want to Remember (2 July–15 August 2020), the artist's latest solo show at Ota Fine Arts in Singapore, Soup of Memories Served with Smiling Sunflowers and Bones (2020) encapsulates the cross-temporal suspension that Kashiki's paintings exude. A figure dressed in white shirt and dark slacks lies curled on a tatami floor next to a low table seemingly caught mid-flip in a traditional townhouse. The building's wave-like roof, wooden veranda, and support beams frame the body from the world beyond it, rendered somewhat liquid by the faint curling lines and textured clouds encircling the scene. Somewhere between a gentle flood and uneasy reverie, the image—named after its colour palette, which the artist likened to a soup of human flesh—is at once loaded and light: a feeling captured in the figure's face, with eyes staring outwards, a knowing smile pulling at the corners of the mouth.

Architectural space is a common vehicle for Kashiki's intersections and splices, some of which veer towards tantalising abstractions. In A Beast Hiding Treasure (2013), shown in the artist's first solo exhibition with the gallery that inaugurated its Singapore space, delicately painted wooden house beams organise a grid cut through with a horizontal billow of green gingham and vertical contoured columns, as a figure disappears through a hole in the centre of the frame, another head emerging from between its legs.

In Untitled (2017), however, a figure is camouflaged entirely—merely a suggestion of a face-down form that emerges out of a field of fine grey, grassy flecks that rise and expand into a flame of reds and blacks where a semblance of legs appear. The painting is particularly stunning for the raw line that divides the image in two: a sleight of hand invoking the surface bleed of a rice paper scroll that epitomises the balance of weights that Kashiki's images hold.

When it comes to explaining her work, which is driven by a 'private philosophy of beauty' that the artist defines as a 'philosophy about gesture', Kashiki is both direct and evasive. Every line and detail are expressions of an ever-shifting concept that is grounded in the act of making. Composed with layers of acrylic paint, ink, pastel, and charcoal applied onto linen stretched over chamfered wooden panels that are then sanded down, works appear as delicate and textured as ink on paper, yet also as sharp and smooth as a silkscreen print.

Bodies in suspension are a constant motif, like vectors mediating frozen yet pulsating compositions.

Child of Unconsciousness (2013), part of the Benjamin Sigg Collection, is a striking example of the latter: in a white room marked out by varying textural strokes, a woman hangs by her ankles from the ceiling, as strong black lines invoke windswept movement to white wisps wrapping her body. A bright blue seascape can be seen through two frames to the left and right of her figure, while a neon pink line curves into the space—details invoking a kind of 80s airbrush aesthetic in which Magritte meets Memphis Design, somehow tempering an ambiguous confrontation with death, fetish, or both.

Child of Unconsciousness connects with The Hanged Man (2019), featured in Kashiki's current Singapore show: a figure composed like the tarot card after which the painting takes its name. Bodies in suspension are a constant motif, like vectors mediating frozen yet pulsating compositions. I Am A Rock (2012), part of the 7th Asia Pacific Triennial of Contemporary Art (8 December 2012–14 April 2013), shows a woman in a hoodie and byzantine black skirt caressing a cardboard box circled by broad monstera leaves in a pond; while in Tiled Room (2010), a figure at the very top of the frame holds on to vines that seem to extend from wooden beams poised in a grey room shaped by a perspectival grid.

Tiled Room was shown at the 4th Moscow International Biennale for Young Art (26 June–10 August 2014), organised by artistic director David Elliott, founding director of Mori Art Museum, who included Kashiki in Bye Bye Kitty!!! Between Heaven and Hell in Contemporary Japanese Art at Japan Society in 2011. The exhibition intended to introduce 'American audiences to a new wave of Japanese artists who challenge their country's long love affair with the kawaii (cute) aesthetic', including Chiharu Shiota, Yoshitomo Nara, and Miwa Yanagi.

But Kashiki's work does not feel so much of a challenge as it does an absorbed trajectory of its own. A considered exploration of beauty as a sensation rather than representation: a concept that Kashiki has described as 'a very fragile conviction' that changes and transforms as a result of its inextricable connection to her 'feelings at any given moment'. 'This fragility plays quite a role in the ambivalence that I feel when I talk about my painting', Kashiki has said. More often than not, the paintings speak to that ambivalence on her behalf.—[O] 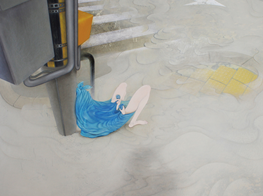 Kashiki was born in 1982 in Kyoto, Japan. She currently lives and works in Kyoto. Tomoko Kashiki’s beautifully crafted paintings depict an intimate world of dreams and desire. Their surfaces are created by layering acrylic paint, sanding it