Yuichi Hirako Invites You to Connect with Nature 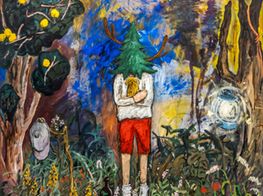 Far from the clouds, Yuichi Hirako has his head in a tree. A pine tree to be exact, with antlers poking out of its leaves, that sits on the shoulders of a figure who appears in worlds that draw on folklore and fairy tales. 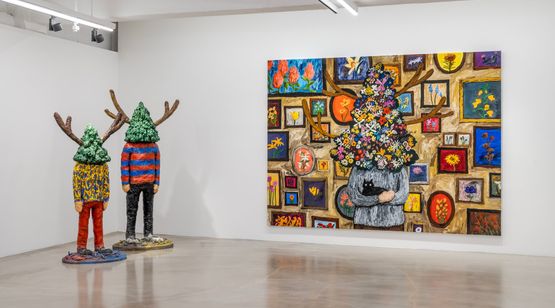 In the acrylic on canvas dream world of Lost in Thought 58 (2020), built up from expressive strokes and starry-night colours, a forest clearing lit by fairy lights hosts Yuichi's tree-man.

He is lying on a wide picnic blanket on which a table brims with food, as if relaxing after a sumptuous midnight feast with a tree and black cat, a racket and radio by his side. 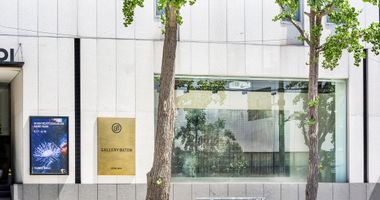 The painting is included in Mount Mariana, the artist's latest show with Gallery Baton in Seoul (13 August–16 September 2021), which takes its name from the Pacific Ocean's Mariana Trench, a crescent-shaped cut in the earth's crust whose deepest point exceeds the height of Mount Everest.

In this realm—the deepest point of which only two people in the world have travelled—Yuichi imagines a narrative of sorts. Not so much A Boy and His Dog but a kodama and their forest friends.

Originally from the mountainous Okayama Prefecture, Yuichi's earlier works invoked the Shinto legend of kodama, spirits believed to inhabit centuries-old trees. To imbibe nature with an enduring, mythical life force, the artist likens every line he makes to carving growth rings that track a tree's age.

'Some lines are strong and assertive in colour, while others blend in with their neighbours', he said aout his recent show at Hong Kong's Warehouse Gallery: 'And sometimes, the lines disappear.'1

That dynamism draws you in. Take Lost in Thought 66 (2021), which shows the tree-figure standing face-first holding a brown puppy, with a baseball cap hanging on rich and dense flora that beautifully encircles his form.

Or the stunning Pressed Flower 03 (2021), where a tree-man sits cross-legged on the trunk of a fallen tree, like a buddha, surrounded by flowers, trees, and shrubs expertly rendered in luminous tones of peach and blue.

From canvas to canvas, there is a sense that Yuichi intends to bring kodama—or any other myth connecting the natural world with supernatural life—out of the woods so that they might speak to an audience whose connection with nature has been weakened, if obscured.

Perhaps in picturing a kodama's world, Yuichi is making visible an ongoing tradition in Japan, where trees are traditionally venerated for their deep connection with time.

These encounters also take place beyond the canvas. For the artist's solo show with KOTARO NUKAGA in Tokyo (23 January–27 February 2021), two larger-than-life tree-man figures carved from wood—Yggdrasill 01, wearing a 'no plants, no life' t-shirt, and Yggdrasill 02 (both 2020)—stood among smaller ceramic figures, clockwork sculptures, and paintings that merged the interior rooms and forest scenes so characteristic of Yuichi's work.

At Gallery Baton, two such figures are accompanied by Apothanasia 01 (2021), a large painted metal sculpture of a vase hosting twisting flowers, along with Leaf Shape 02 (2021), where the tree-man sits on a stack of books amid plants on shelves and framed pictures: all details created as wooden reliefs attached to a surface composed of wooden panels.

The studio-slash-salon setting is a through line that shows Yuichi's tree-man at his most autobiographical: as in Lost in Thought 59 (2020), where potted plants loom over a figure sat crossed legged on the floor, or Gift 15 (2021), where the tree-man is painted in close frame against a picture-laden wall, his leafy head blooming with flowers.

'I try to depict a space between nature (outside) and society (inside). The cluttered realism of my work represents my own society', Yuichi has said.2 Running through this realm are a mixed bag of emotions—'Happiness, ideals, pessimism, cruelty, chaos, indifference, enthusiasm, permanence, and demise'—which the artist expresses through style.

Take Lost in Thought 67 (2021), showing an anthropomorphic tree trunk with black, lace-up boots, who stands with Yuichi's protagonist, holding a wide-eyed cat, all rendered in greyscale. Included in Mount Mariana, that painting's subdued expression is contrasted, say, by Lost in Thought 65 (2021), which shows Yuichi's tree-man in a rowboat laden with goodies, anticipating the picnic in the clearing.

Even in these newer works, Yuichi's world recalls an ongoing tradition in Japan where trees are traditionally venerated for their deep connection with time.

As Glenn Moore and Cassandra Atherton write in Arnoldia, the magazine of Harvard University's Arnold Arboretum, 'the idea of tree spirits was kept alive in storybooks and anime (most notably the Hayao Miyazaki film Princess Mononoke), and belief in the presence of kodama in old trees continues.'

At the The Institute for Nature Study, formerly the Matsudaira feudal estate, a Japanese black pine dating to the early 1600s has been dubbed 'Fabled'—'a living link to this emblematic era of Japanese culture', Moore and Atherton note, and 'a symbol of cultural continuity.'

The Fabled Pine is revered for its resilience, having survived, among other disasters, the 1657 fire of Meireki, which burned 70 percent of Tokyo, and the 1923 Kantō Earthquake that razed the city to the ground.

There are lessons in such tales for the human world, which may explain Yuichi's playful conflation of human and tree, and the continuity symbolised by the stable presence of his hybrid protagonist.

As the exhibition statement for Mount Mariana explains, the artist's 'perspective is connected to the context of Deep Ecology's understanding: all living beings as dependent existences on others within a single ecosystem.' This truth never goes away. —[O]

Japanese artist Yuichi Hirako works with painting, sculpture, and drawing to reconsider the coexistence and boundaries between plants, nature, and humans in modern society. The artist approaches this theme through the lens of Japanese folklore and

Gallery Baton in Seoul are opening their first solo exhibition of work by Japanese painter and sculptor Yuichi Hirako this week. 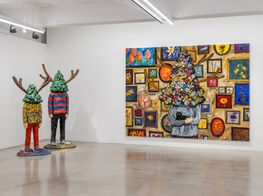