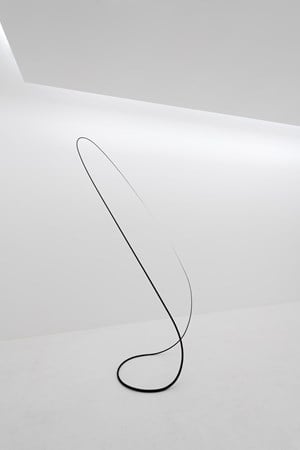 Otto Boll operates from an expressly minimalist sensibility. His installation works, acutely reduced forms of steel, are like immaterial lines drawn in space, cutting through emptiness. Suspended by barely visible nylon threads, these lines are floating and inhabiting the air overhead. Using 3mm steel strips of which he sharpens the tip until it is so fine that its outer limit disappears. The works oscillate between materiality and abstractness, presence and absence, the seen and the unseen.

The pared-down simplicity of Boll’s work produces an artistic statement which is at odds with the visual (virtual) atmosphere surrounding us. Rather than being a point or an exclamation mark in an empty space, it can be seen as a hyphen, a connecting bridge, which instills in contemporary viewers a much needed pause in a state of flux.

Articulating something that appears to be almost lighter than air, Boll invites us into a state of contemplation. One needs to walk around the work in order to attain a more “complete” experience of the sculptures. When one encounters the extremely thin floating lines in the emptiness of space, one’s gaze is slowed down in order to take a closer look at the sculptures. Yet, the eye is unable to detect a real end: the imperceptibly fine strips of steel extend into the unknown, to which the sculptures—as impulse and guide—direct the view.  The actual material extends beyond its own limitations into the realm of the potential. This potential is not only manifested by visible changes in the sculptures, but also by the viewer’s observation.

One determinant of Boll’s work is his discontent with the established visions on the world around. The artist believes that a new vision can neither be originated from things perceived, nor be achieved by the synthesis of values drawn from previous experience. The artist is searching for the visible that’s not yet visible, as well as the spatial expansion of thought and feeling. While the works at first sight appear to be linear, the spaces they inscribe evoke deeper thinking about interaction between the shape of the sculpture and the space.

The work provides a silence of space for the viewer to reorient the existence of visuality and reality. While being dazed by the irresolvable questions of reality, the viewer starts to engage with the emptiness of the void. In the meantime, the sculpture can open up the viewer’s perceptions of the surroundings. It brings in “possibility” – it makes one aware. A great deal of awareness is involved in his work. Hence the void is a fullness as well – a plenitude of possibilities. Fullness and nothingness come together.

Boll’s works are timeless and offer a sense of endlessness since the hovering sculptures reside in a state of flux. Nonetheless, the viewers have their own time with the sculptures in a space. The sculptures are just like individuals with whom one shares the same dimension of time. It’s essential to experience his work in a certain time and space in order to fully understand it.

“My work – and sculptures in general – must be experienced first hand. They convey empirical values, i.e., they cannot be compared with anything but themselves. Only their proximity can bring about a pristine experience. Sharing space and time with them makes the experience unique: Sculpture demands our presence, especially in times when the "media" push themselves into the foreground, pretending to be "immediate". This leads to diminished intimacy.” [1]

In fact, these sculptures highlight both the void and the infinite by illuminating their limits, and by making these limits imperceptible. This creates an impossibility of definition and thereby the work, by its very essence, slips beyond our grasp, eliciting fundamental questions of phenomenology. The encounter between viewer and work is a transition zone between experience and conceptualisation: the mind continues to draw the line where it has physically ended. The void is charged by this articulated absence. The floating lines drawn in space are delicately punctuating the void.

Born in 1952 in Issum/Geldern, Germany, Otto Boll studied art at the branch of Münster of the Düsseldorf Academy where he attended Ernst Hermanns’ class. Boll received various art awards include the Piepenbrock-Förderpreis for sculpture in 1990. He currently lives and works in Rheinberg, Germany.

Sign up to be among the first to know when new exhibitions by Otto Boll or at Axel Vervoordt Gallery open.
Sign Up