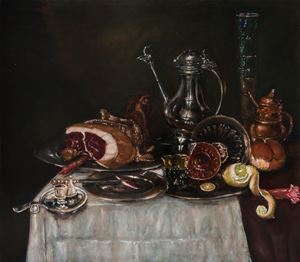 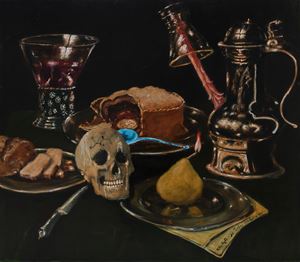 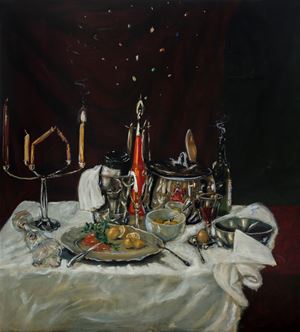 Two years after his last exhibition at Galerie Templon, Belgian artist Jan Van Imschoot, the self-proclaimed master of 'anarcho-baroque', is returning to his native country to present a new series of restyled still lifes.

In Le bouillon de onze heures (the 11 o'clock broth), Van Imschoot explores the art of the 17th-century Northern School. The artist looked for inspiration to the silent universe of one of its masters: Willem Claesz Heda. Following in the footsteps of the one of the most illustrious of Flemish painters, Van Imschoot reworks the still life form to reflect his distinctive universe, restoring its noble status thanks to his virtuosity and mastery of the subject.

The exhibition thus offers a series of canvases conveying an equivocal message. There is the sumptuous coffeepot featuring a crystal glass tipped over its spout and, in blood-red letters, the words 'the rape'. An old-fashioned feast blends into a landscape formed by a tempestuous sea. An ancient wine glass stands next to a pack of cigarettes. And then there is the show's title, Le bouillon de Onze heures [Eleven o'clock broth], a double-edged expression as it refers to a dying person's last meal, which could be poisoned or could be comforting.

At a time when the issue of political correctness divides our Western societies, Van Imschoot questions the role of art and artists. Should art always suggest or should it lay bare? As soon as a work is displayed, telling a story with a thousand and one facets, it can be freely interpretated by anyone viewing it. 'Our imagination has a crucial role to play', he explains, guiding us on an alternative exploration of our history and the meaning of our existence.

Born in 1963 in Ghent, Jan Van Imschoot has been living in France since 2013. His work is exhibited in Belgium and internationally. The Ghent SMAK held a major solo exhibition of his work in 2002. More recently, his paintings have been shown at the Dusseldorf Kunstpalast (2005), Museum Dhondt-Dhaenens in Deurle (2008), National Art Museum of China in Beijing (2010) and Fondation Volume ! in Rome (2012). In 2018, he took part in the group exhibition Sanguine/Bloedrood conceived by Luc Tuymans for the M HKA in Antwerp and Fondazione Prada in Milan, and in Feast of Fools, Bruegel Rediscovered at Château de Gaasbeek in Belgium in 2019. The Roger Raveel Museum is hosting the 7th Biennial of Painting on the theme of inner spaces until 18 October 2020. Van Imschoot is showing four large paintings from his Intérieurs series at the Biennial.

Sign up to be among the first to know when new exhibitions by Jan Van Imschoot or at Templon open.
Sign Up