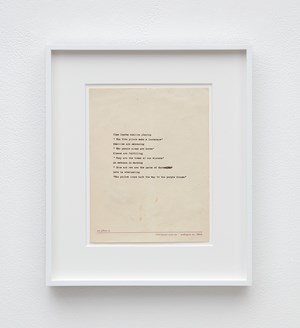 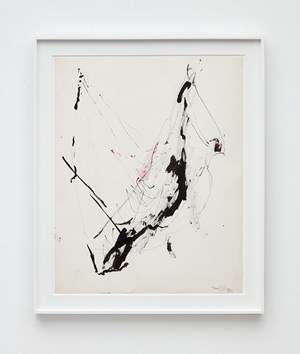 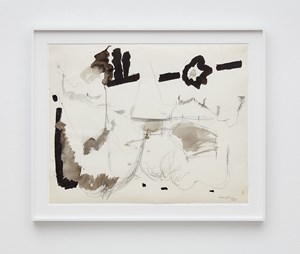 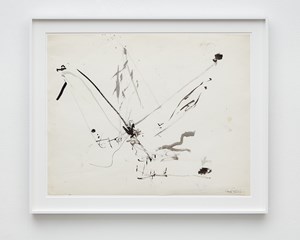 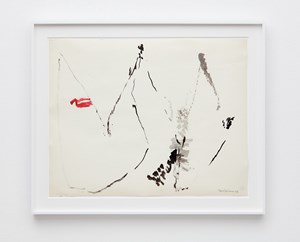 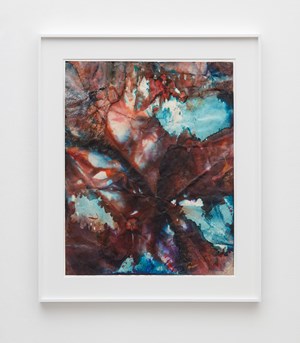 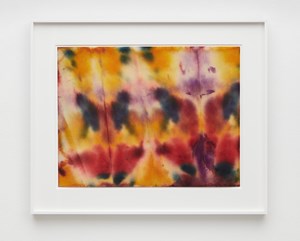 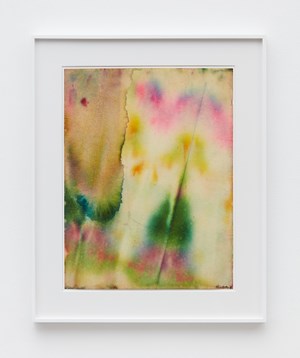 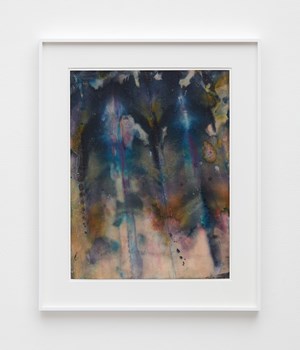 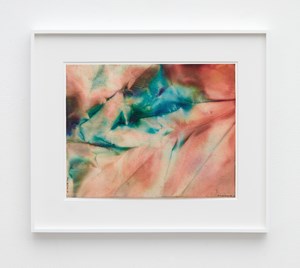 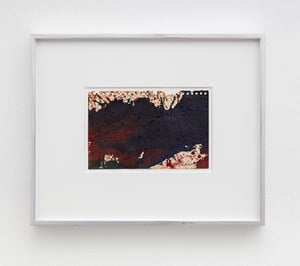 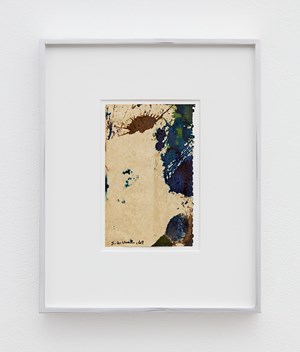 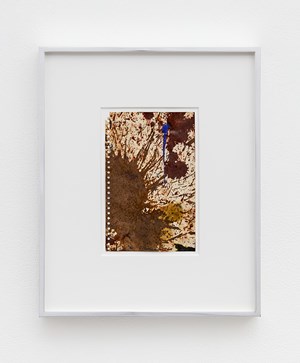 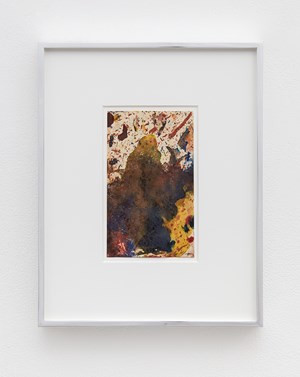 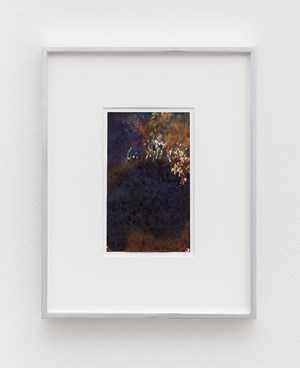 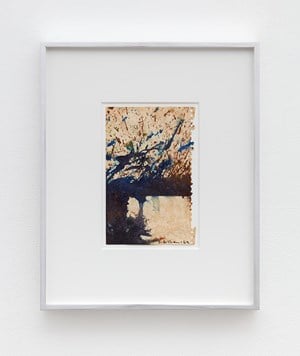 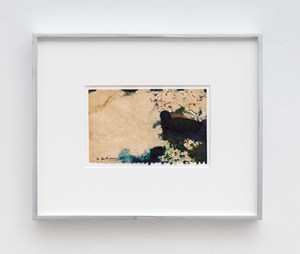 David Kordansky Gallery is pleased to present Starting: Works on Paper 1967–1970, an exhibition of never-before-seen works by Sam Gilliam from a highly formative moment in his development.

In the late 1960s, as he was engaging in the experiments that led to his breakthrough Beveled-edge and Drape paintings, Gilliam was also honing methods of working on paper with watercolours and ink that constitute an important facet of his practice 50 years later. Starting includes over a dozen important examples of these early works, which can be divided into three typologies: folded and stained works; works in which thicker, expressionistic application of medium dominates; and calligraphic ink and wash works created in response to, and as documents of, the architectural compositions of the Drape paintings. The exhibition provides a remarkably personal and intimate portrait of an artist discovering the full breadth of his powers. (It also features a typewritten manuscript of one of his poems from the era.) Its stylistic variety reflects the changing contexts and circumstances in which Gilliam was working, as well as his preternatural curiosity and fierce commitment to his practice.

The earliest works in the show, from 1967, feature dense arrays of blue, brown, and yellow applied in series of overlapping splatters. Their energy belies the scale of the compact sheets of sketchbook paper on which they are made, and their density of colour allows Gilliam to maximise the potential of these small surfaces, resulting in works that hint at a surprising sense of monumentality. The natural rhythms that animate them come directly from the source, as they were produced by the artist en plein air. Gilliam would bring his baby daughter to Rock Creek Park, located near the family's home in Washington, D.C., and work while she slept alongside him. He experimented with the relationship between colour and movement, responding to the visual textures of the trees and the moods of the landscape, as well as encounters with then-contemporary paintings by Mark Rothko and Morris Louis, which he was seeing in galleries in New York.

A selection of works from 1968 and 1970, meanwhile, are directly related to the vocabulary Gilliam was also developing in the Beveled-edge and Drape paintings, though the difference in their materials yields an altogether different sense of touch. By folding sheets of paper according to schemes derived from origami or playful forms like paper airplanes or cat's cradles, and then dipping them into watercolours, he could create complex staining effects, Rorschach patterns, and crystalline combinations of hues with a great sense of optical depth. The pigments are never fully controlled, but coaxed and guided according to Gilliam's manipulation of the support. As a result, the movement of water is captured in bracingly direct form, and the sculptural tendencies that animate much of his project come to the forefront; indeed, Gilliam continues to make works on paper in this way today.

A series of ink and wash works from 1969 demonstrate a third and dramatically different set of formal concerns. Because the largest of Gilliam's Drape paintings actively respond to the architecture in which they are installed, each installation gives rise to its own three-dimensional composition, and each Drape is in fact given new life whenever it is hung. Photographs can record the outward manifestation of the Drapes, but for a period Gilliam would also produce works on paper, like those included in Starting, that captured their spirit and inner force. Though they could be used during subsequent installations to guide the hanging of the Drapes, they are standalone artworks in their own right, providing fresh insights into the artist's approach to line. They also seem to reflect, in particularly direct and condensed fashion, the art historical modes and cultural phenomena that had nourished Gilliam's formation: improvised music, in particular the structured freedom of jazz; the then-recent advances of Abstract Expressionism and Washington, D.C.-based Colour School peers; fluidity between scales, mediums, and genres that evokes the scope of the Renaissance and the multi-disciplinary ethos of the Bauhaus; and the urgent social and political issues that were rapidly transforming American life.

And yet, as is always the case for Gilliam, these influences are less important as reference points than they are as indicators of his faith in the sheer power of abstraction, as a visual language and a way of life, to move the viewer and precipitate change. 'Time leaves memoirs playing,' reads a line from a typewritten poem, produced by the artist contemporaneously with the works in Starting. It is an apt summary of Gilliam's unflagging allegiance to the present moment and his maverick sense of both art history and his own evolution, which has seen him pay heed to the polymathic nature of his imagination by refusing to settle into a single style, and by treating every body of work, and every individual artwork, as an opportunity for renewal and reinvention.

In addition to a traveling retrospective organised by the Corcoran Gallery of Art, Washington, D.C. in 2005, Sam Gilliam (b. 1933, Tupelo, Mississippi) has been the subject of solo exhibitions at Kunstmuseum Basel, Switzerland (2018); Phillips Collection, Washington, D.C. (2011); J.B. Speed Memorial Museum, Louisville, Kentucky (1996); Whitney Museum of American Art, Philip Morris Branch, New York (1993); The Studio Museum in Harlem, New York (1982); and the Museum of Modern Art, New York (1971); among many other institutions. A semi-permanent installation of Gilliam's paintings will open at Dia:Beacon in Summer 2019. His work is included in over fifty public collections, including the Musée d'Art Moderne de la Ville de Paris; Tate Modern, London; the Museum of Modern Art, New York; the Metropolitan Museum of Art, New York; and the Art Institute of Chicago. He lives and works in Washington, D.C.

Sign up to be among the first to know when new exhibitions by Sam Gilliam or at David Kordansky Gallery open.