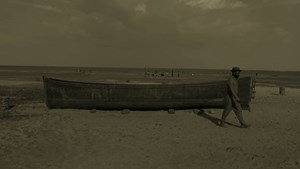 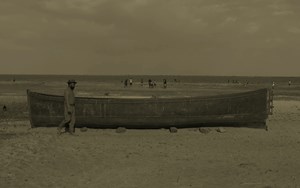 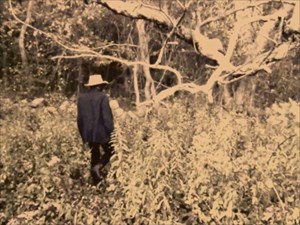 The anagrammed title of Samson Kambalu’s second solo exhibition with Goodman Gallery is reflective of the work in both content and form. Drawing on his Malawian upbringing, Kambalu references the syncretic cultures he grew up around such as the Beni to produce work that celebrates and interrogates this practice of integrating Western influences into local traditions and customs.

Kambalu describes the formation of syncretic culture as an act of ‘détournement’–similar to the Situationist strategy of revaluation. In this exhibition Kambalu employs the same process, epitomised by his Bubble Gum Flags. The work pays homage to a childhood brand of gum, Dandy Bubble Gum, which contained cards bearing flags of various countries in its wrapper. Kambalu and his friends would collect the gum, chew it and shuffle the flags on the playground; a form of unintentional abstraction the artist has since come to use for his series of colourful geometric prints and constructions.

The presence of flags further informs Nyasaland Analysand through reference to the Malawian culture of the Beni, Mganda and Malipenga dances. This tradition sees individuals donning uniforms worn by the 'Keyala' or King’s African Rifles (KAR), an East-African branch of the British army who served in both World Wars, to create a form of masquerade that incorporates flags and other Western symbols of nationalism. A reference to these dances can be found in cardboard cutouts of Beni and Mganda soldiers who stand at attention around the exhibition beside their packaging.

For Kambalu these dances and other forms of syncretic culture reflect a type of hysteria. 'I think Africans subjected to Western culture and then bewildered by it turn their experiences into a dance as a means of coping with it,' says Kambalu. Dance, and other forms of play, then become a form of self-therapy and means for warding off alienation.

'Hysteria can be a sign of health, your soul is still stirring, and it has the potential of turning whatever you’re experiencing into art. I like this kind of psychoanalysis, it allows for affirmation. In Malawi, if you’re sick you don’t go to a witchdoctor you go to a herbalist. You go to the witchdoctor to be told a story for your suffering.'

Critical to Kambalu’s exploration of syncretic culture is through its sense of time. The African dandy is another common character found in post-colonial societies, appearing in typically Western clothes. Kambalu adopts this persona in what he calls ‘Nyau Cinema’, a series of brief filmed vignettes inspired by the psychogeography and histories of various places including Europe and America. The repetitive and diagrammatic nature of the Nyau films lend the exhibition its rhythms.

'Western time is teleological, it has a beginning and an end. African and Chewa time is more an eternal immanence,' says Kambalu. 'Looks can be deceptive. What I like about syncretic cultures is that they look Western and yet the heart of it is totally alien. I think that’s very much like me.'

Sign up to be among the first to know when new exhibitions by Samson Kambalu or at Goodman Gallery open.