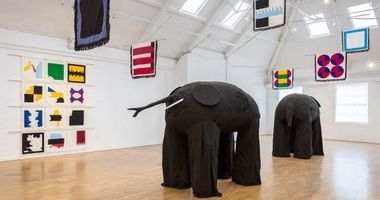 Malawi-born contemporary artist, writer, and academic Samson Kambalu playfully explores art as a medium for critical thought and expressions of sovereignty. He is renowned for his 'Nyau Cinema' projects and mixed-media conceptual artworks, including his 'holy' footballs.

Samson Kambalu attended the University of Malawi, completing a BA in Fine Art and Ethnomusicology in 1999. As his artistic career developed, Kambalu moved to England in 2002 to pursue an MA in Fine Art at Nottingham Trent University. Kambalu later completed a PhD based on his multidisciplinary conceptual practice at the Chelsea College of Arts, London (2016).

Now based in Oxford at The Ruskin School of Art, the culture and social structures of Kambalu's native Malawi remain a dominant influence on his practice. These include the Nyau culture of gift giving, the centrality of play, as well masked performances. These cultural influences have found their way particularly into his film works, but also his conceptual art and installations.

Other influences come from 19th- and 20th-century Western philosophical thought, including Protestant traditions of critical inquiry. Kambalu is also influenced by Situationism, a mid-century movement and liberal philosophy emerging from Dada and Surrealism.

Samson Kambalu's first conceptual artwork was Holy Ball (2000). Playful and transgressive, the work consists of a football wrapped in pages from the Bible. Beginning with locals and students at the University of Malawi, Kambalu has since invited audiences in various local and international venues to 'exercise and exorcise' by playing with these footballs.

Creating new rituals by physically engaging audiences with the artwork, Kambalu roots this work in the Nyau value of play. London-based curator and writer describes Kambalu's approach as 'using play and satire to engage in radical acts of public expression'.

Kambalu began to incorporate film into his practice when he moved to England. The 30-second monochrome clips, filmed according to the self-established rules of Nyau Cinema, are playful, social, and non-linear. Each is required to be spontaneous and site-specific, and is often filmed by strangers. Audio is used sparingly, and the footage is edited to create a non-linear sense of time. The presentation of these films takes the form of social media interventions, site-specific installations, talks, and performances—all intended to encourage audience participation beyond the film itself.

Colourful flag designs are also a recurring motif in the artist's oeuvre. As a child, Kambalu would collect and trade bubblegum cards depicting the flags of the world. Kambalu's Southbank Centre show Black Jack (2021) focuses on this aspect of the artist's work. Presenting a series of remixed flag designs, the show reinvented patterns and iconography from around the world to evoke forms of Western abstraction and African Kente cloth designs.

In 2021, the artist was awarded the commission for the rotating fourth Plinth commission in Trafalgar Square, London. Samson Kambalu's successful fourth plinth proposal was a sculpture based off a photograph of Malawi Pan-Africanist thinker and preacher John Chilembwe and British missionary John Chorley. Reflecting his interest in football, Kambalu has also produced work for two FIFA World Cup projects.

A Ghanaian grain silo and a sculpture featuring the faces of 850 trans women are among six works being shown in miniature.

The exhibition History Without A Past, currently on view at Mu.ZEE, Ostend, features recent work by Samson Kambalu and Vincent Meessen. Of all the currents of ideas revealed by 1968, the Situationis

Be among the first to know when new artworks and exhibitions by Samson Kambalu are added to Ocula.
Sign UpLogin