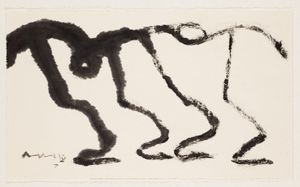 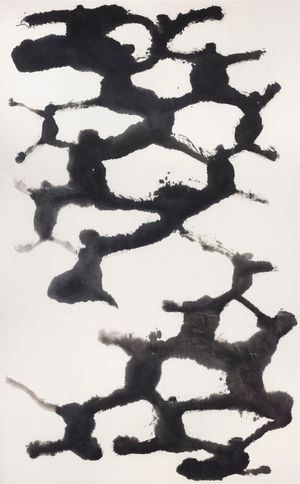 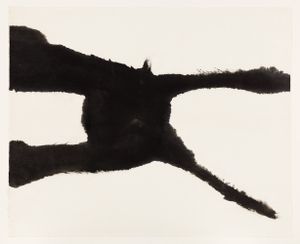 Though these Sun and Moon are rootless, they orbit around the same paths, as if they are following rules. And we humans seem to share some similarities with them.

With umbilical cord cut off from our mothers, we wander around, alone and rootless.

Yet as we spend most of our time supporting families and go through rites of passage in life—marriage, funeral and ancestral rites—we all grow older with hair graying like frosts falling on grounds and we shall all go back to where we came from—Mother Nature.

This is, indeed, the circle of life. And looking from different angles, we shall all ask ourselves who we mourn for and rejoice over and who we incline to.

And with pointy ends of brushes, painters should make sure to capture such rootless poignancy of ours.

For its summer exhibition, Lehmann Maupin announces a solo presentation of work by Suh Se Ok (1929–2020), who is widely recognised as a master of Korean abstract ink painting. Following his first solo show at Lehmann Maupin on West 22nd Street, New York in 2018, the upcoming exhibition showcases seven works from his signature People series as an homage to the artist, who passed away last November at the age of 91. Suh's People series is an expression of the essence of the human race through subjects that he discovered through many years of meditation. With only a few brushstrokes of ink, Suh delivered messages of liberty and peacefulness to viewers.

Influenced by his father, who was a scholar and independence activist, Suh Se Ok became well-versed in calligraphy and poetry at an early age. In 1946, however, Suh abandoned his pursuit of a literary career in favour of one in fine art, joining the Arts Department of Seoul National University—the first art academy in Korea—as a member of its inaugural class. While still a student Suh won the Prime Minister's Prize at the 1st National Art Exhibition in 1949. Suh belongs to the first generation of artists who lived through the tumultuous Japanese colonial period and ideological confrontation during the Korean War. Impacted by this, Suh responded at his own pace to the demands of the time, including the removal of vestiges of Japanese imperialism and trends in local art scenes that absorbed influences from the West in the late 1950s. He began experimenting with abstract ink painting by reinterpreting elements of Muninhwa, the literati painting proactively embraced as part of leisure activities and meditation among intellectuals. In 1960, he formed the Mukrimhoe, or Ink Forest Society, a group that signalled the start of experiments with abstract ink painting by blending the technique of literati painting and methodology of Informel, as well as contributed to the modernization of traditional oriental painting.

Bordering between representational and abstract, Suh Se Ok's works are vibrant and celebrate the properties of paper, ink, and brush. From early in his career Suh chose to play with variations of 'dots' and 'lines' instead of concrete forms in a quest to render light and shadow using ink alone. The human 'figures' that Suh rendered in his 'People' series are abstract signs or symbolic gestures that illustrate relationship, movement, and the human feelings of joy, anger, sorrow, and pleasure. Suh once stated, 'Dots are connected to form a line and then further, a circle. And this circle circulates with no beginning or ending.' The artist's explanation hinted at the possibility of infinity through a minimum unit while offering a reminder that humans are, ultimately, parts of the universe. Embracing people of all ages, gender and ethnicities, Suh Se Ok's 'People' series represents the very essence of the artist's 70-year long career, transcending past and present and encompassing decades of art history from both East and West.

People by Suh Se Ok closes in 3 days.
Sign up to be among the first to know when new exhibitions by Suh Se Ok open.
Sign UpLogin