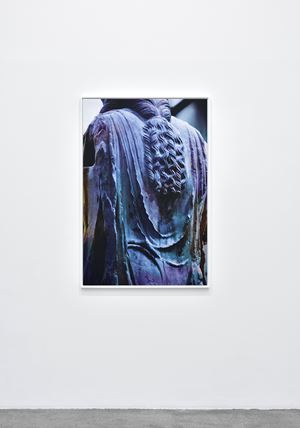 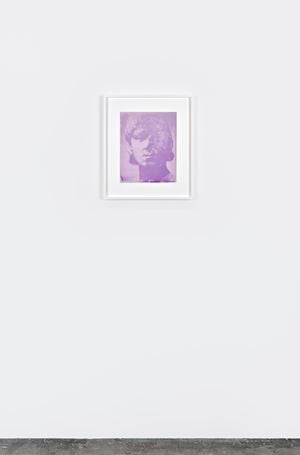 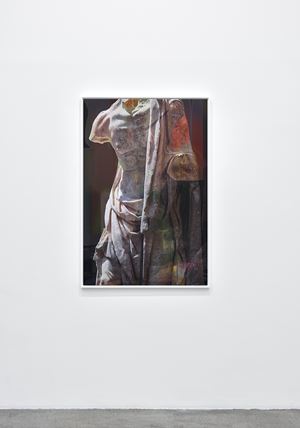 Galerie Marian Goodman is pleased to present its latest exhibition by James Welling bringing together two new bodies of photographs on Greek and Roman architecture and statuary. The exhibition title refers to an essay on sacred architecture published in 1962 by the American academic Vincent Scully. Welling's recent fascination with antiquity pervades his new work, and has become his main source of inspiration. The exhibition offers the visitors a way to travel back in time and into the history of photography. As he says, 'In The Earth, the Temple and the Gods I am hoping to restore the spirit of the ancient world to a selection of material fragments.'

In 2018 Welling photographed the Greek and Roman antiquities in the Metropolitan Museum, New York. In summer 2019 he made his first trip to Greece, from which he brought back thousands of images. Most of the twelve large-format photographs on show at the gallery were taken in and around Athens: The Acropolis, the Old Agora, the Roman Agora, the Acropolis Museum and sacred site of Eleusis. Sometimes in colour, sometimes in black-and-white, these UV-ink prints on dibond represent details of torsos and sculptural decoration as well as architectural views. Two smaller colour oil prints complete the corpus.

Recognised for his innovative approach to photography, James Welling is an artistic polymath: no genre or medium is off limits and he is constantly experimenting with and inventing new processes, whether exploiting the new possibilities afforded by digital technology or revisiting the variety of ancient techniques with a personal twist. But while each new series represents an opportunity to explore all the possibilities of photography, it is colour that has dominated his research over the last two decades.

In this exhibition, for example, several antique torsos as well as drapery, the locks of a kouros, a Corinthian capital and a piece of sculptural decoration are heightened by rich colour applied using a technique invented by Welling (involving the layering of unconventional colour channels in Photoshop). These new works pay homage to the original polychromy of Ancient Greek art. As he points out, 'Sculpture and architecture in Ancient Greece were commonly painted. Intense colour and gold leaf emphasised textile, hair and skin and modern approximations of this polychrome are startling to viewers still accustomed to the colourless neoclassic ideals of beauty. But I was not interested in simply recreating the colours of the ancient Greeks. Using digital technology, I applied highly unnatural colours to the sculptures. My hope is that these colours seep into the ancient stone and take on a life of their own.'

The photographs of the Erechtheion and the Propylaia in this exhibition remind us that architecture is a constant among Welling's interests, ever since one of his very first series, 'Los Angeles Architecture' (1976-1978) and all the way up to the 'Glass House by Philip Johnson' (2006-2014). Although this will be less obvious to visitors, the black-and-white images, too, have been adjusted in Photoshop. In fact, Welling took his inspiration from the tones and contrasts of the very first photographs brought back from Greece by travellers and archaeologists: 'When I got home I adjusted my digital files so that they would mimic black-and-white nineteenth-century film. (The earliest film was not sensitive to blue light and skies were rendered a uniform white while red and yellow tones read darker.) The three black-and-white architectural photographs in the exhibition remind me of the photographic albums of early archaeological expeditions, the first photographic imaginings of Greece. I felt that I was turning photography into a veritable time machine.'

On the gallery's lower floor, the UV prints on dibond are exhibited with a set of twenty photographs from the 'Julia Mamaea' series, named after the Roman regent of the Severan dynasty who was the mother of its last emperor, Alexander. Inspired by a technique patented in 1855 by Alphonse Poitevin, a French chemist and civil engineer, Welling has produced over a hundred coloured variations of a single photograph showing the marble head of Julia Mamaea kept at the Metropolitan Museum. In the dark room he developed a new procedure based on chromatic unpredictability. 'I had been researching early photographic processes for a number of years and I decided to print Julia Mamaea using a modified nineteenth-century printing process, collotype, in which I substituted coloured dye for lithographic ink. This technique produced aqueous tints ranging from turquoise to lavender to salmon.'

The fact that the sculptural portrait of the Roman regent is damaged heightens the elusiveness and expressiveness of the images in a surprising way. Welling recalls how this mutability struck him while he was working on the series: 'The cumulative effect of these multiple Julias was uncanny. It seemed that her clothing, her gaze, even her gender were fluid, changing dramatically from image to image.' Initiated in 2018, and still ongoing, the Julia Mamaea series is the subject of a forthcoming artist's book to be published by MACK.

James Welling was born in Hartford (Connecticut) in 1951. He studied fine arts at Carnegie-Mellon University and modern dance at Pittsburgh University, then received his M.F.A. degree in visual arts at the California Institute of the Arts (CalArts) in 1974. From 1995-2016 he lived in Angeles where he taught in the art department at UCLA. He is now based in New York and since 2012 has been visiting professor at Princeton University.

In 2017 a major retrospective of Welling's work, Metamorphosis, opened at the Stedelijk Museum voor Aktuele Kunst (SMAK) in Ghent and travelled to the Kunstforum in Vienna. In 2012 and 2013 two solo shows were organised: Monograph, at the Cincinnati Art Museum and at the Hammer Museum in Los Angeles, and Mind on Fire at the MK Gallery, Milton Keynes (England), the Centro Galego de Arte Contemporanéa, Santiago de Compostela (Spain), and the Contemporary Art Gallery, Vancouver (Canada). In 2014 Welling was awarded the Infinity Award by the International Center of Photography in New York and in 2016 the Excellence in Photography Award by the Julius Shulman Institute at Woodbury University, California.

Please join us at the reception for the artist on Friday 24 January from 6 to 8pm.

The Earth, the Temple and the Gods

Sign up to be among the first to know when new exhibitions by James Welling or at Galerie Marian Goodman open.