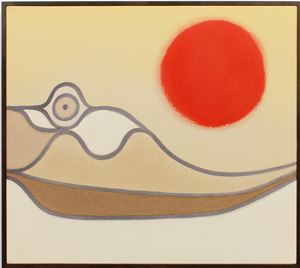 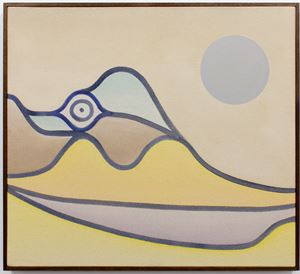 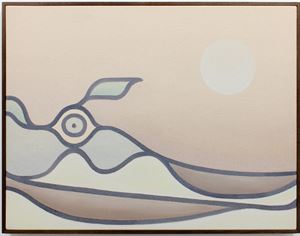 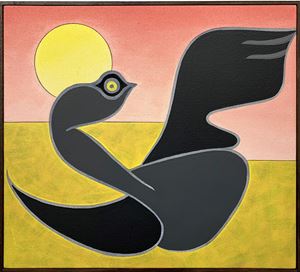 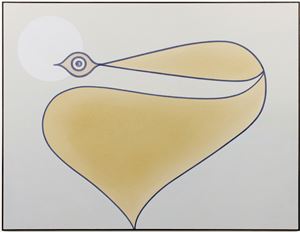 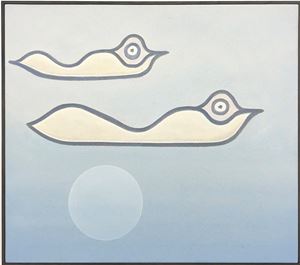 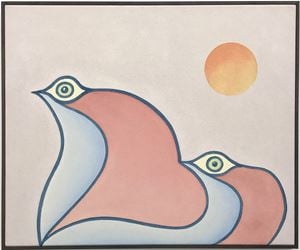 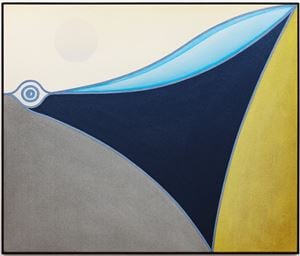 We are pleased to present Land is Witness, a solo exhibition by artist, Anthony Miler, who is based in Brooklyn, New York. The online exhibition will be held from September 24 at the Viewing Room on our gallery website. The artist held his first solo exhibition at MAKI Gallery in November last year, during which his paintings, with their distinctive motifs and gentle hues produced by a unique combination of pigments, drew the admiration of many visitors. This exhibition will present eight new works created this year, together with the artistic concepts that Miler has continued to develop over the past months.

The first thing one notices in Miler's works is the 'eye' motif that is set in a birdlike form. This eye, which does not reveal any emotions, quietly observes us. At times, the birdlike form appears to have spread its wings, reminding us of a bird flying through the sky. However, Miler explains that 'they are not necessarily birds'. His aim is to paint the beauty of form in an evolutionary context and it is merely that the result is reminiscent of a bird.

This May, Miler participated in an artist-in-residence program in London, where he dedicated himself to his artistic practice. Due to the worldwide outbreak of COVID-19, he had no choice but to extend his stay which, he says, 'allowed me a chance to slow down in life', to rest and have time for clearer thought. He had been seeking to depict 'evolution without humans, or after humans' and felt that artworks themselves are in one sense, a form of life unto themselves. The exhibition title, Land Is Witness, emerged from deeper reflection under these circumstances.

Miler has spoken thus in regard to Land Is Witness, 'this exhibition has more to do with landscape, so I felt it might be fine to suggest what might already seem a familiar idea to some, that the landscape bears witness to our actions'. Turning to the relationship between the viewer and the artwork, he explains that the viewer regards each work, sensing the gestalt and the weight (or presence) of the works as a whole. At the same time, the works themselves observe how the viewer senses and perceives. That is to say, it is possible for the artwork to become a witness to the discussions and value judgements we as people make. Furthermore, Miler suggests that when we encounter the 'frank and mysterious object' – the artwork – we are placed in a position of openness, removed from social status, politics and prejudice. He concludes that this encounter offers people the possibility to evolve in a new way.

Due to COVID-19, the movement of people has been heavily restricted. In a world where instead of persons, it is artworks alone that cross borders, coming and going, the relationship between people and artworks is gradually changing. Artworks become witnesses to a place, evolve and set out again on their next journey. Affected by those artworks, we in turn might also evolve.

We invite you to see and experience these 'stages of evolution' at the Viewing Room on our website.

Sign up to be among the first to know when new exhibitions by Anthony Miler or at MAKI open.