Building on previous bodies of work, Betrayal (Sweet Blood) presents another collection of Park’s mysterious melodramas, made up of fractured perspectives, intertwining psychological spaces, and amorphous appetites and desires. Upon entering the exhibition, one encounters a new suite of large-scale paintings by the artist, while the second floor offers insight into Park’s creation process with a selection of drawings. The artist always begins her paintings with detailed sketches, often resulting in finished artworks themselves, and in this exhibition, Park displays both mediums as integral to her practice. Employing blunt forms, bold colours, and disorienting compositions, these new works expand Park’s distinct visual language as well as her thematic reach.

Consider the show’s title painting, which was inspired by a scene in Charlie Chaplin’s film The Idle Class. Chaplin plays a rich man with a drinking problem who receives a note from his wife saying she won’t see him until he swears off alcohol. Turning his back to the camera, Chaplin gazes at a framed photo of his beloved then bows his head and starts to heave up and down dramatically. But as he slowly turns around, we see that he’s not weeping but shaking a cocktail, stone-faced. He pours himself a drink, raises the glass to no one, and takes a sip.

Park’s painting flips the gender and perspective of the scene, showing a woman from the front; a hand covering her face as she peaks out through eyes that are simultaneously laughing and crying, her features framed by a seeming loop of running tears. And yet, somehow the woman appears calm, even amused. Whatever else might be going on, she is betraying her emotions in several senses of the term.

Park turns Chaplin’s burlesque inwards, portraying the ambivalent realm that we all occupy most of the time, hovering between thoughts, feelings, and their expression. This is the liminal space Park captures in all her work, in between interior and exterior, fantasy and reality, desire and its object. The eyeballed shadow that floats amidst the couples in Three Faces and Shadow Kiss is a creature of this in-between realm: simultaneously an extension of the person that cast it and a separate entity with its own awareness.

Is the woman in Invitation looking at the hard-bodied torso reflected in the mirror behind her? Or is she looking out at us, offering us a view? Is she extending or accepting the invitation?

Who is dreaming what in Seafood Dream? Have the fingers of the lady peaking in the window been transformed into crustaceans by the force of her appetite? Or are we seeing what the shrimp looking back at her sees? Perhaps it is translating her fingers into familiar shapes? And why is the lipsticked fish skeleton on the table staring up at the small seascape on the wall—is it dreaming of better days gone by?

The frequent animal subplots in Park’s work further extend the sense of overlapping living presences. The mosquito feasts on sweet blood from the woman’s hand, oblivious to her theatrics. Seagulls eye the elaborate sea platter of a blissed-out pair of lovers on the beach. A cat and a dog peak out from under a table at a messily drunk couple. Amorous snails cozy up in the corner of a still life.

Through these and other motifs, Park suggests the sensory overload of the simplest slice of life. The subjects depicted in Betrayal (Sweet Blood) may be hazily familiar, but Park fills in the details with an uncanny array of flora, fauna, people and things—a teeming entanglement of elements as absurdly incongruous as they are unexpectedly harmonious. 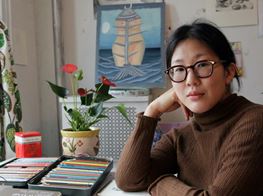 GaHee Park dismantles the boundaries between public and private space in new paintings and drawings on view at Perrotin in New York and Public Art Fund's city-wide project, Art on the Grid. 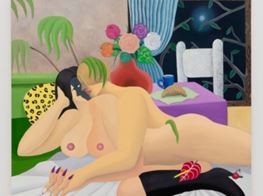 There is a coolness to the way Park paints her figures, as well as a sculptural attention paid to form and surfaces.

Sign up to be among the first to know when new exhibitions by GaHee Park or at Perrotin open.