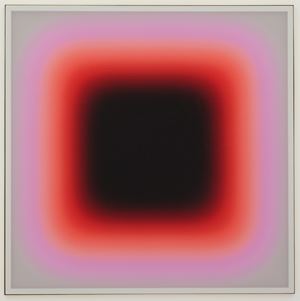 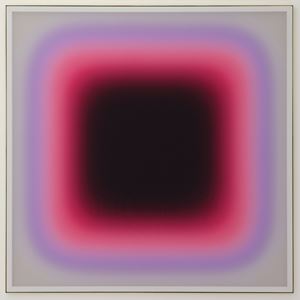 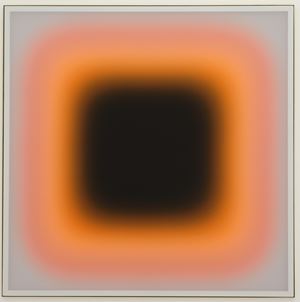 Starkwhite is pleased to present Poikilos, a solo exhibition of new work by Jonny Niesche.

Poikilos is a spatial, immersive experience. Carefully constructed from the ground up, white vinyl blankets the gallery floor creating an ethereal tone within which sit three tall block-like sculptures, a mirrored diamond that spins in front window, and three new paintings. Offering Starkwhite visitors a vastly transformed experience of the space than they might known previously, each element in this intentional composition contributes to the creation of a spatial ambience that hedges us towards the emotional and slightly unknown. Crisply bright and filled with lushly seductive surfaces, Niesche's exhibition seeks to destabilise perception, offering an architecture that sharpens our senses and creates an atmosphere for connecting with his work. This exhibition wants you to feel, but what exactly?

In this experience of complete immersion the white floor is joined by mirrored planes on the paintings and sculptures to reflect light from the gallery's large windows and also capture the audience as unwitting performers in the work. The manner in which Niesche's practice engages with the viewer — from polished surfaces to deep dark pools at the centre of his canvases and his undeniably beguiling use of colour — shows his careful employment of spatial dynamics and the primacy of our senses. Being with Niesche's work can be a seductive sensory overload, a negotiation of intensity and intimacy as well as a ticket to an elegant futuristic realm. Materially fetishistic, his practice is celebrated for bold chromatic expanses and saturated tones that dissolve from one hue to the next in an unfolding play of light and colour. Each of the totem-like sculptures in the exhibition bears a colour sample lifted from one of the paintings then expanded into a gradient allowing sugary pink lavender to slip into minty green and gold cascade into lilac. While Niesche's work is well known for its beauty and urban allure these compelling surfaces also hide a deeper game at work. Poikilos is a Greek word used to refer to dappled colouring and pigmentation, such as the skin of a leopard or the many-coloured iridescent scales of a snake. Such dazzling or eye-catching surfaces in the animal kingdom are as likely to be distractions as calls for attention, being more a signalling strategy than obvious display. But what is being signalled here? Beyond the beautiful surfaces of Niesche's practice lies a complex association of sensation and spirituality.

In Jonny Niesche's practice colours are presences, or performers. Each tone deliberately selected for its resonance and how it exists in conversation with the next, Niesche understands and exploits the power of colour to trigger our senses. Trawling fashion, music, makeup, and his own practice he digitally selects and distills hues to define the right experiential outcome, often one that offers a certain frequency to the gallery space. His practice is characterised by a plurality of colour field combinations, seriality, and a play of light and motion. Intriguingly his work vibrates and hums with an undercurrent of energy while also fostering a meditative space that guides us towards softening the harsh edges of the world. Establishing deep connection with its audience, his painting relays a surprising moment of stillness and contemplation, offering a portal to deeper states. While it is tempting to be drawn to the colour surrounding the painting's dark centres, past the pigment and into the silky sheen of the softly textured voile is where the humming gets louder. Placed in stark contrast to colour-rich hues, Niesche's dark centres fairly vibrate with energy. At once luminous and weighty, these works mark a familiar tension between spirituality and materiality, a visual aesthetic that suggests both containment and boundlessness.

Rich in interior-exterior negotiation, Nieche's practice takes a variety of sources and contexts as its departure point. Drawing upon cultural movements — including modernism and abstraction's use of colour and scale to create a sense of the sublime — and the cosmetics counter alike in Niesche's work high art meets the shiny allure of pop culture. Fused with a succession of feather-edged, hazy geometric forms, his painting is disco-era glamour fused with New York minimalism. With their soft focus halos radiating towards mirrored frames, the after-dark aesthetic of disco's suave urban optics abound. This is a delve beneath the shimmering surface, fabulous creatures, dancing and decadence to that space where sound is muffled and sensation reigns. It's beautiful nobodies and celebrities rubbing shoulders on a back-lit dance floor to disco's four-on-the-floor beat. Sexy but androgynous, Niesche's all encompassing atmosphere is light, breathy, and shot through with colour.

There's more than just the blurred soft light and seduction, however. In creating art works and immersive atmospheres that interact with their audience, Niesche's practice echos disco's figure-ground reversal. As a social movement disco was instrumental in challenging rock music which by the 1970s was becoming a sit-down affair, with stars up on the stage in the lights and the audience listening in the dark below. Disco clubs reversed this, pulling the audience into the art form and putting them centre stage and amongst the lights. Music changed to support this shifting emphasis also, its rhythm becoming more insistently driving and lyrics moving to second place. Disco may be celebrated for its shiny brightness and flashy aesthetic, but its inclusivity, impact, and cultural contribution run deep. Shared with Niesche's practice is a celebration of the surface as site for performance, for aesthetic experimentation, and socio-cultural investigation as much as pleasure and beauty.

Sign up to be among the first to know when new exhibitions by Jonny Niesche or at Starkwhite open.