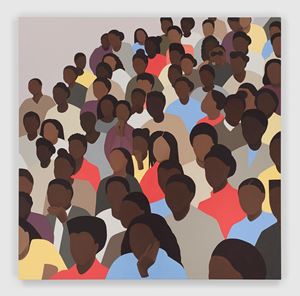 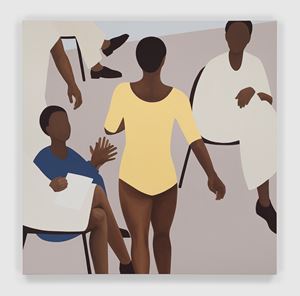 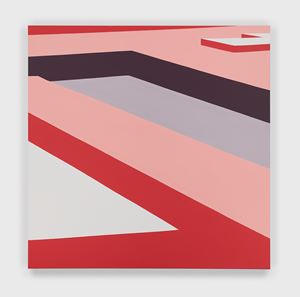 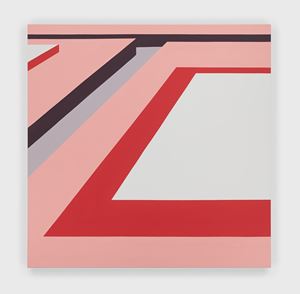 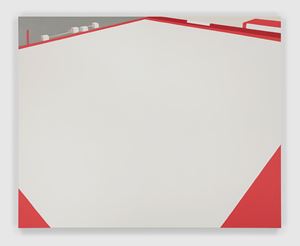 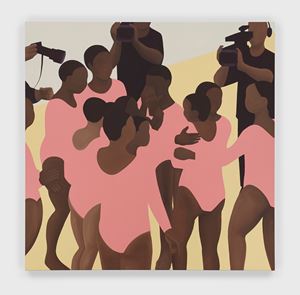 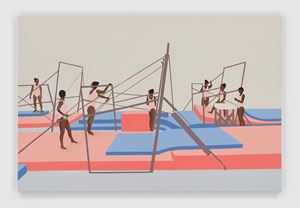 Remarking on the origins of this series, the artist relates how, after a period of almost exclusively painting portraits, she found herself drawn to a painting she had made years earlier. The work depicts the inside of a gymnasium, an architectural form she found arresting at the time. In it, a group of young gymnasts are painted warming up in front of a mirror.

Nkosi describes returning to this image several times before its allegorical significance emerged for her; in conversation with Document Journal's Miss Rosen, she states, 'The artist, like the gymnast, is witnessed and judged: trying, succeeding, failing.' The gymnasium exists as a contained universe with physical, political and emotional portents.

This pictorial microcosm echoes shifts across the world of contemporary art as figures navigate the possession of talent and the politicisation of their bodies. Traversing vulnerability and visibility, the projected subversion in Nkosi's figures becomes an embodied interrogation of hegemonic notions of excellence. She writes, 'Ideology is at work in this sport. Gymnastics has been used as a tool of propaganda, of control, of patriarchy and of nationalism. Defining what bodies should look like, what perfection is, what the ideal human is. And here we are now - referencing the dominance of Simone Biles, currently the most decorated gymnast in World Championship history - when that "uber human" is a young, Black woman.'

For the artist, self-described as 'navigating the field of art as social practice', this body of work carries with it an implied question that reaches beyond the constructed arena, asking 'what inner resources allow a person to emerge - walk through, walk away - from such glaring scrutiny not only with their humanity intact, but with grace?'

The paintings in Gymnasium range from fluidly composed figurations of gymnasts and judges to unoccupied spaces verging on architectural abstraction. Nkosi's figures are decidedly not painted in peak moments of athleticism. Rather, the artist depicts the moments preceding and following the execution of a move, or the aftermath of failure, in a foregrounding of the subtleties of performance that often escape public notice. Clusters of spectators make their first appearance in the series, and the tension of their participation is rendered through suggestive mark-making instead of detailed micro-portraits. Shifting focus away from the fact of success or defeat, Gymnasium spotlights the humanity engaged and set aside in the shift from human to performer, youth to labourer, person to demigod, and the reverse.

The video work in this exhibition extends the artist's probing of the threshold between individual and archetype. The studied restraint of her two-dimensional works is exchanged for close-up footage of young gymnasts of different ages, from different periods of time, in private moments of anticipation, with public displays of selfhood articulated through costume and adornment.

Sign up to be among the first to know when new exhibitions by Thenjiwe Niki Nkosi or at Stevenson open.