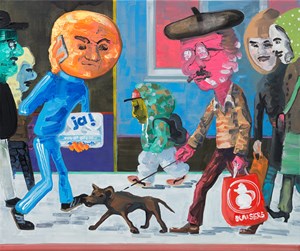 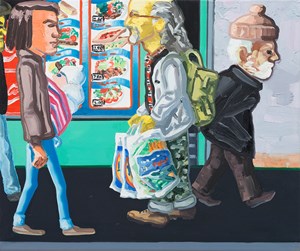 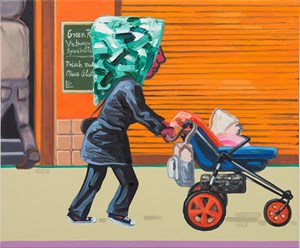 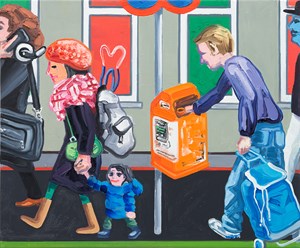 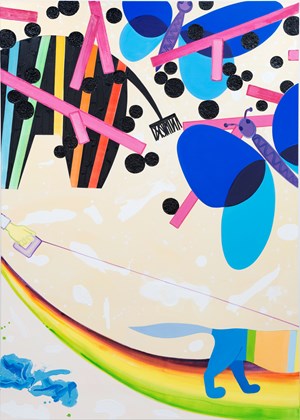 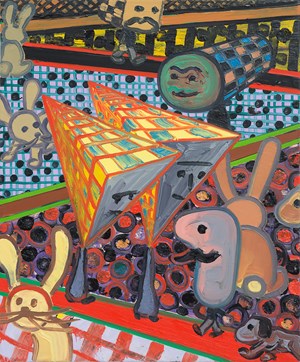 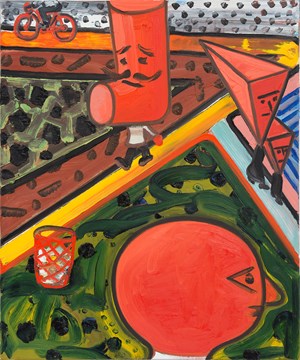 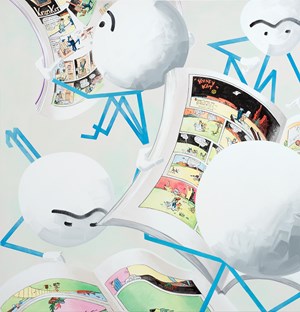 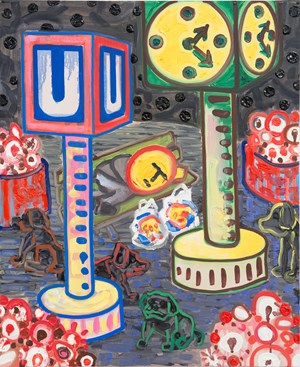 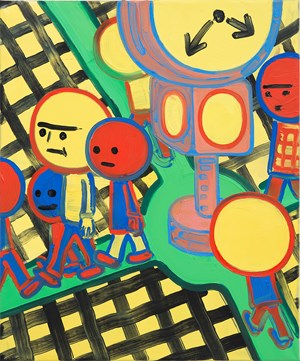 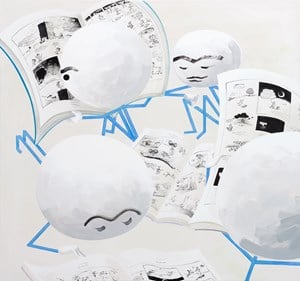 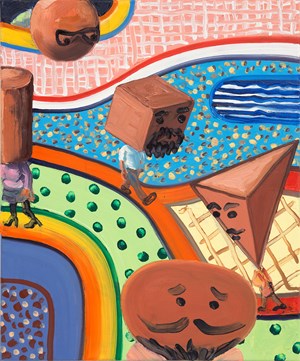 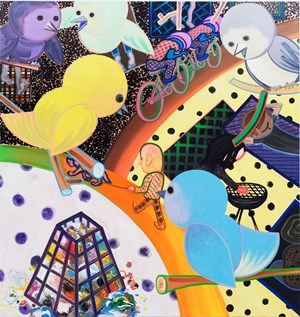 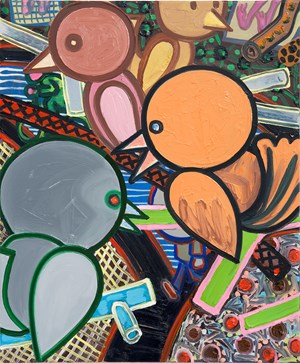 Thomas Erben Gallery is pleased to present the first U.S. solo exhibition of Berlin-based painter, Marcus Weber. Last seen in New York at the Sanya Kantarovsky curated group show, Sputterances, at Metro Pictures (Spring 2017), this presentation collects paintings from Weber's 'Adalbertstraße', 'Krazy Kat', and 'Artforum-Leser' series (among others). Comprising work from the past ten years, the show is a bracing introduction to Weber's poppy, comic, and off-kilter geometric approach to abstraction, figuration, and social observation.

Following his studies at the Kunstakademie Düsseldorf (1984–1992), Weber quickly established a singular aesthetic. Ironic and unromantic, yet also lively, absurdist, and wry, Weber reflects a generation of Germans who came of age navigating the first wave of the internet's unlimited flood of images.

Though Weber's art has consistently foregrounded formal considerations, over the years his subject matter has increasingly revealed the artist to be an astute cultural observer–including of the immigrant Kreuzberg neighbourhood outside his studio on Adalbertstraße in Berlin. The paintings from this series–V-Park (2011), F-Park (Caparol) (2012), and others–are populated with the familiar touchstones of Kreuzberg: bbqs, squirrels, dog owners out for a walk, women in hijabs out for a stroll or sitting on park benches.

The selection of the works in the exhibition allows the visitor to see how–over time–Weber has both synthesised and alternated between abstraction and comic figuration and between referring to content and generating it.

Weber's 'Artforum-Leser' series proceeds to demonstrate an arch synthesis. In BEST OF 2013 (2014), the titular high-culture magazine is read by comic figures sitting on toilets in an abstractly patterned, yet spatially suggestive environment. In an absurdist stroke, the toilets' drainage drifts off in random paths, functioning both as plumbing as well as formal elements which further define the pictorial space.

Well-known in Germany, where his paintings and sculptures have been widely exhibited–including in an exhibition of the private collection of Kasper König at Galerie Thomas Fischer, Berlin (2018); Kunstwerke, Berlin (2013); and Von der Heydt-Museum, Wuppertal (2008)–Weber's body of work has not yet received the same amount of attention outside of Europe. Striving to broaden Marcus Weber's audience, Thomas Erben Gallery is thrilled to present this exciting artist for the first time in the United States. 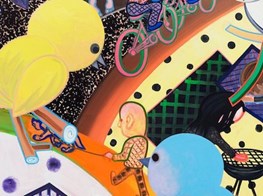 Related Press What to See in New York Art Galleries This Week 2 May 2018, The New York Times

What's great about George Herriman's much admired early-20th-century comic strip Krazy Kat is its nearly unlimited scope for self-awareness. A stripped-down but playfully catholic style — combined with a sturdy, repetitive narrative frame — meant that Herriman could wink at the reader as often as he wanted, without losing his footing...

Sign up to be among the first to know when new exhibitions by Marcus Weber or at Thomas Erben Gallery open.
Sign Up