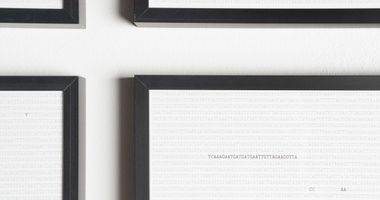 In Alicja Kwade's sculptural installations, commonplace items from rocks to household appliances are repurposed as players in whimsical illusions that challenge our perception of time, space, and systems of value. Through her use of such reflective objects as mirrors and glass, Kwade creates immersive artworks that reconsider the constituents of reality.

Born in Poland, Kwade moved to West Germany as a child and graduated from the Berlin University of the Arts in 2005. Her early works show the artist's long-lasting interest in found materials and elements of repetition. The 'Bordsteinjuwelen' series (Gutter Gems, 2008), for example, consists of 100 stones that Kwade collected in Berlin and cut and polished like jewels.

The transformation of familiar realities is often at play in Alicja Kwade's artwork, notably in her 'Reconstituted Objects' series (2016–2019). For this, the artist ground personal items including lamps, iPhones, and kitchen appliances to dust, which she used to sculpt vessels. Presented in glass vitrines, typically reserved for museum displays, the urns and vases attest to the transmutability of everyday objects in unexpected ways.

In 2017, Alicja Kwade began creating large-scale installations consisting of large rocks elevated on steel bars. WeltenLinie (World Lines), which was first shown at the 57th Venice Biennale, is made up of double-sided mirrors and pairs of objects that are placed inside and outside open steel frame structures. Depending on the viewer's position, the objects become reflections in the mirrors on matters of reality.

Alicja Kwade's exploration of large rocks developed into ParaPivot (2020), a Roof Garden Commission at the Metropolitan Museum of Art, New York. In the work, steel frames are interlocked at different angles, so that visitors can walk around and through them. Along the steel bars are spherical rocks, each weighing up to one-and-a-half tonnes, that allude to planets. Through the allusion to a planetary system, Kwade evokes other systems, such as political, social, and economic, that we live in.

The complexities of this multiverse guided by entropic forces was reiterated in Kwade's 2021 exhibition across Pace Gallery and König Galerie in Seoul, Sometime I Prefer to Sit on a Chair on the Earth, a blend of sculpture and installation deconstructing time and space. 'It is easy to imagine these forms dividing or multiplying,' remarks Sujin Jung in an Insight for Ocula Magazine, ultimately attesting to the artist's concern with interfering with human perception.

Alicja Kwade's other outdoor projects include Die Bewegte Leere Des Moments (2016), an enormous pendulum with a clock at the end, presented in Nuit Blanche, Paris; Against the Run (2015), commissioned by Public Art Fund, New York, which takes the form of a clock with a face that has been turned anti-clockwise, making it impossible to read time; and Nissan (Parallelwelt 1+2) (2009), in which two identical Nissan Micra, different only in the location of their handles, are presented alongside.

The NFT derives from an earlier work in which Kwade printed her entire genome on over 250,000 sheets of paper.

Fifteen artists are exhibiting works in the Saudi Arabian desert at this year's Desert X AlUla, which runs from 11 February to 30 March 2022. They were asked to explore ideas surrounding oases and illusions under the theme 'Sarab', Arabic for mirage.

Known for confronting the laws of physics, the Polish-German artist builds a planetary sculpture and ponders our place in the universe

Late one Friday night in the middle of August, I stood on the deck of a ferry departing from the glowing environs of New York and was lucky enough to glance up from my phone in time to catch the inscr

High above the trees of Central Park, Alicja Kwade has created a celestial ode to infinitude. Theories of the multiverse have perforated the public's perception of spacetime in recent years, drawing u

Be among the first to know when new artworks and exhibitions by Alicja Kwade are added to Ocula.
Sign Up Login