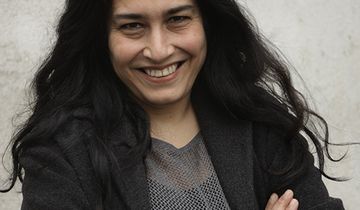 Ocula Conversation Bani Abidi: ‘What you see in my films is what I know’ Read More

Bani Abidi's early engagement with video, beginning at the Art Institute, led to the incorporation of performance and photography into her work. These mediums have provided Abidi with potent, sometimes subversive means to address problems of nationalism—specifically those surrounding the Indian-Pakistani conflict and the violent legacy of the 1947 partition dividing the two countries—and their uneven representation in the mass media. She is particularly interested in how these issues affect everyday life and individual experience.

One of Abidi’s earliest videos, Mangoes (1999), reveals her barbed sense of humour. Two women—one Indian, one Pakistani, both played by the artist—eat mangoes and reminisce about their childhoods. Soon, however, their amiable chatter escalates into competitive boasting about the fruit grown in their respective homelands, which they reference from memory as expatriates. The artist uses a similar tactic in the two-channel video The News (2001). Here, a Pakistani and an Indian newscaster, again both performed by Abidi, issue divergent reports of the same event, based on a familiar joke. In addition to video, Abidi also works with photography, digital imaging, and installation. For Karachi—Series 1 (2009), she photographed non-Muslim Pakistanis in the street at dusk during the holy month of Ramadan, when the metropolis is quiet as Muslims sit down to break their fast. Abidi renders visible the Hindu and Christian minorities, which together constitute less than five per cent of the population, acknowledging that the city is their home too by inviting them to carry out mundane domestic activities—reading a newspaper, ironing, arranging flowers—in public space. These are ambivalent portraits, each labeled with the subject’s name, time, and date, as if they were documents of surveillance. The figures are shot from behind at a wide angle, the light of the setting sun heightening the oddity of their interpolation into the streetscape—as does the images’ lightbox presentation. But while politics and cultural critique pervade Abidi’s oeuvre, aesthetics remain her primary concern; these works may act as catalysts, but the responsibility for real change ultimately resides with the viewer.

Abidi studied painting and printmaking, earning a BFA from the National College of Arts, Lahore, Pakistan, in 1994. She later attended the School of the Art Institute of Chicago, earning an MFA in 1999. She completed residencies with the Skowhegan School of Painting and Sculpture, Maine (2000), Fukuoka Art Exchange Program, Japan (2005), and DAAD Artists-in-Berlin Program (2011–12).

Read More Ocula Conversation Bani Abidi: ‘What you see in my films is what I know’ By Federica Bueti, Berlin Bani Abidi discusses her research interests, from gentrification to identity politics, ahead of her exhibition at Sharjah Art Foundation, Funland, which follows They Died Laughing, the artist's first comprehensive exhibition in Germany at Martin-Gropius-Bau.

Read More Ocula Conversation Amna Naqvi By Susan Acret, Hong Kong Art and culture are susceptible to the rampant global homogenisation that is occurring today, and we felt that there were ideas, philosophies, voices and opinions that needed to be discovered and explored.