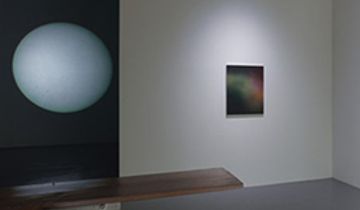 Darren Almond is an English artist for whom the concept of time forms the crux of his work, particularly its fleeting and ephemeral qualities, and how they relate to space, history, memory, and the individual. He uses a wide range of media, including photography, film, installations, and sculpture, to produce highly abstract works that are both recognisable and uncertain, unfathomable, yet absolutely certain.

Almond addresses several aspects of time, such as the notions of waiting and duration, by building up certain tensions. The central theme of time becomes more apparent the longer one views his works, for the anticipation for resolution also rises. But herein lies a fundamental aspect of Almond’s abstraction that is difficult to resolve. Is time beyond our comprehension or is it simply our own construction? How can it be accurately measured if we have no definitive beginning and end points? By utilising such weighty, unanswerable debates, Almond gives his seemingly simple landscapes and journeys a deep sense of mysticism and ambiguity.

To give these concepts a visual grounding, Almond works with landscapes and other geographical locations, places that are often difficult to reach and isolated from the wider world. For his 'Fullmoon' series, which began in 1998, Almond has photographed landscapes on every continent under moonlight, using exposures of between 12 to 30 minutes to drastically change the nature of the landscape. The sky appears as if lit by the sun and edges are softened and appear more sculptural, while plants and rocks attain a dreamlike, haunting appearance, transmuting the landscapes to those of a young planet Earth. These works do not go through a post-production process, yet the pieces are rich in colour, almost appearing to have been hand-applied. They show how by allowing the landscapes to be exposed to extended time, new surfaces and colours are revealed that would ordinarily be hidden.

Almond also explores the relationship between time and humanity, focusing particularly on how we utilise time to organise society, and how it affects us. Almond’s films often observe a subject and their actions over a period of time. One example is Bearing, which follows a sulphur miner in Indonesia on his journey from the bottom of a crater that is producing plumes of yellow smoke, to a weighing station. The sculptures that Almond produces also deal with this relationship, often commenting on the mechanised way in which humans attempt to quantify the passage of time and use it. Of interest is the system of clocking in and out of work at specified times. He examines it by lining up hundreds of digital clocks on a wall, every single clock a constant reminder of the unstoppable movement of time.

Ocula Insight Darren Almond at SCAI The Bathhouse, Tokyo Using both traditional and new media, Darren Almond explores personal and collective visions of time. He questions how such a concept may be understood within the limits of human perception, using res

Advisory Perspective Taipei Dangdai 2022: Advisory Selections 19 May 2022 Taipei Dangdai's third edition brings together 62 galleries this year, with some joining for the first time.