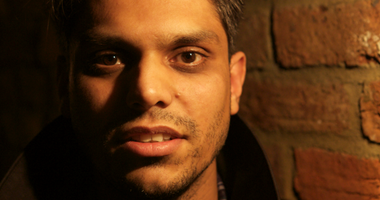 British artist Haroon Mirza works with video, objects, light and sound to form large-scale installations, kinetic sculptures and performances. His work explores tensions between sound waves, light waves and electrical currents, often blurring the line between noise and music. In what he refers to as 'self-governing systems', Mirza combines rewired electronics such as turntables, speakers, radios and household items including lamps and chests of drawers to create three-dimensional collages that are in many ways reminiscent of Dadaist principles. Take for example his mixed-media sound installation, Cross section of a revolution (2011): footage of African drummers at a Muslim wedding ceremony plays on loop on three screens while a student participating in a speech competition in Lahore is seen on another. The work acts as a remixing of two distinct Islamic populations. A light hangs from a constructed metal frame, illuminating a turntable that spins clockwise.

In 2007, Mirza received his MA in fine art from Chelsea College of Arts, London. He also holds an MA in design critical practice from Goldsmiths, University of London (2006) and a BA (Hons) in fine art painting from Winchester School of Art (2002). In 2011, Mirza exhibited at the 54th Venice Biennale and received the Biennale's Silver Lion award for most promising young artist. Mirza has since been the recipient of numerous awards, including the Daiwa Foundation Art Prize in 2012, the Zurich Art Prize and the Nam June Paik Art Center Prize in 2014 and the Calder Prize in 2015. He has been the subject of several institutional exhibitions throughout the globe, including Preoccupied Waveforms (2012) at the New Museum in New York.

Mirza's primary interest is consciousness—in particular, as stated in an interview with Ocula Magazine in February 2017, 'how consciousness relates to scientific endeavours: what we know about the physical world and universe and how that doesn't make sense in terms of metaphysics and consciousness, because we don't understand consciousness in scientific terms.' Mirza uses science to combine metaphysical and physical things—to create logic out of chaos. In a studio visit with Tate in March 2013, regarding how he forms new work Mirza said, 'Sometimes it might start with an object, sometimes it might start with a sound or a way of making a sound, sometimes it might start with an idea [or] a point of interest in something sociological or cultural.' Mirza is fascinated by how the internet is changing audiences' behavioural patterns and ways of understanding, as well as in the growing interest and need for acoustic space even more than visual culture. Sonic effects, processes of exploiting sound and vision, nuances between hearing and listening, and materialising the sound of light all play into his installations. Mirza considers the visual and the acoustic to be of equal significance to what he does as an artist.

Diana Campbell Betancourt, artistic director of the Samdani Foundation and chief curator of the Dhaka Art Summit, discusses her curatorial practice, including her curated group show Fabric(ated) Fractures, currently on view at Alserkal Avenue in Dubai.

Duddell’s, the restaurant and bar which has also become one of Hong Kong’s most important art spaces, recently collaborated with London’s Institute of Contemporary Arts (ICA)

On October 20, the Calder Foundation in New York announced its selection of 38-year-old British artist Haroon Mirza as the 2015 Calder Prize Laureate. The award grants Mirza a cash prize of USD 50,000, in addition to a residency at the Atelier Calder and the placement of his artwork in a major public institutional collection.

A slew of superstar curators, including ones from the Tate Modern, the Pompidou and the Rubin, are now on board for the upcoming Dhaka Art Summit. The huge biennial of South Asian art, now in its third iteration, will be held in the capital of Bangladesh February 5 through 8, 2016. The show will include commissioned solo works by Lynda...

Sign up to be notified when new artworks and exhibitions by Haroon Mirza are added to Ocula.
Sign UpLogin