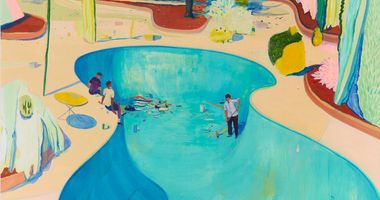 Jules de Balincourt has lived in the United States since childhood, where his consumption of all-American television seems to have infiltrated his way of thinking. This powerful, hyper-real exposure appears to have made its way into his dynamic and compelling paintings, resulting in heady, high-temperatured works, luscious in oil and saturated colour and often jarring to the viewer.

Amalgamating movements such as Pop art, folk art, figuration and abstraction, de Balincourt brings an array of formal properties into one dreamlike space. Painting on board, the artist rarely works from photographs or images. Instead he uses tools such as stencils, tapes and knives to improvise so that each work turns out unique. In varying sizes, de Balincourt’s formally diverse works are linked through motifs and subject matter that include cityscapes, mise en scènes and formally arranged figures.

Some of de Balincourt’s paintings are abstracted and stylised so that the viewer’s own intuition is brought into play, as with Illuminated (2012). Others such as City Dwellers and Star Seekers (2010) and High and Low (2013) are more figurative but still wholly imaginative, with soft and hazy colours and a slightly warped perspective. De Balincourt’s paintings offer escapism; not only does one lose themselves in the faux-naif brushstrokes and lines, but the scenes invite one to think about the individual figures depicted and their lives, as well as perhaps their relationship to the voyeurism of Alfred Hitchcock’s films.

De Balincourt’s paintings often feel incomplete, as if an idea has been presented but its closing argument is yet to be heard. There is a suggestion that something more might be brewing below the surface. Because of this, the viewer’s own response becomes pertinent to finishing the work’s logic.

In 2005, de Balincourt completed his Master of Fine Arts from Hunter College, New York. It was also in New York in 2006 that he founded the alternative art space Starr Space (formerly Starr Street Projects). He ran this space for three years, hosting projects by artists and performers alongside other art events and community programming. Today de Balincourt uses this space as his studio.

'I rarely make paintings with a set, initial plan. They start as abstract forms and it becomes this intuitive, primitive, dance—a dance in the dark,' Jules De Balincourt tells me in a warm office at

There's the depth and scope, the sensational fields of vision in the paintings of Jules de Balincourt. As if in perennial perch just above the action, or off to the side observing the group, de Balinc

Victoria Miro stages a group exhibition by artists concerned with socio-political issues of their day, who question the status quo and the power structures found within societies, and who take the language of protest as a means to explore its potency. Inspired by Alice Neel’s 1936 painting Nazis Murder Jews, the exhibition draws together new...

Read More
Related Press Power to... the art of protest 19 September 2016, The Guardian

In repressive states, the role of the artist is unambiguous: to assert the individual imagination, the singular power that all dictatorships fear. I remember once talking to the Czech dissident and writer Ivan Klima, who had been subject both to the arbitrary horror of a Nazi concentration camp as a child and the long grinding years of Soviet...

Be among the first to know when new artworks and exhibitions by Jules de Balincourt are added to Ocula.
Sign UpLogin