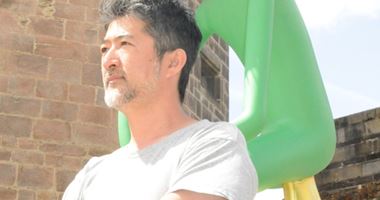 Known for his controversial explorations of Japanese culture, contemporary artist Makoto Aida works across a variety of media. From performances and installation art to sculpture, painting, and prints, Makoto Aida's artworks examine Japan's complex history and social norms alongside broader themes, such as war and sexuality. Playful and colourful in execution, they appropriate and subvert elements of manga and kawaii culture.

Born in 1965 in Niigata, Japan, Makoto dreamed as a child of becoming a manga artist. As a teenager, he took up oil painting, and developed an interest in Japan's troubled wartime history. He later went on to study painting at the Tokyo University of the Arts, completing a BFA in 1989 and an MFA in 1991.

As he became involved with Tokyo's avantgarde scene, the artist turned to parody, in addition to traditional Japanese art. These influences, as well as the manga and kawaii culture Aida grew up with, are spread throughout Aida's oeuvre of the past two decades.

Makoto Aida's Azemichi (a path between rice fields) (1991) is an early iteration of his playfulness and engagement with tradition. In the painted paper panel, the titular path between rice fields aligns with the hair of a Japanese girl parted to form pigtails; a humorous connection between traditional subject matter and a popular subject of contemporary manga and kawaii subculture.

In 1994, Makoto Aida formed an artist collective named The Group 1965 with Parco Kinoshita, Hiroyuki Matsukage, Tsuyoshi Ozawa, Oscar Oiwa, and Sumihisa Arima. Loosely associated, the only commonalities between the artists in the collective are their nationality and year of birth. Each joint exhibition of the group thus allows for different mediums and approaches to subject matter to come together in addressing topics such as globalism, AIDS, and punk culture. Alongside his work with The Group 1965, Makoto is also a member of the alternative puppet theatre, "Gekidan☆Shiki", run by his wife, the artist Hiroko Okada.

Cynical of political correctness, Makoto Aida attracted controversy in the 1990s for a series of transgressive works that featured culturally shocking content. Aida describes such work as a form of 'shock therapy', drawing out the unspoken issues that already exist in Japan.

Even when taking a less overtly crass approach to his work, Aida still raises questions regarding the nature of society. In Makoto Aida's Lonely Planet (1998) video, the artist tests the global dominance of the English language by sitting in front of a world map calling numbers in various countries at random to see what language the receivers speak.

In a 2014 video work, Aida posed as the Japanese Prime Minister speaking in flawed English before an international assembly. The speech devolves from an apology for past acts of imperialism into a plea for countries to follow the politically and economically self-isolating policy of Sakoku, historically adopted by Japan in the Edo period.

The use of shock as a means of disrupting cultural assumptions remains a tool frequently used by Makoto Aida. In the large painting Jumble of 100 Flowers (2012), young nude women gleefully run towards the viewer as they are being blown to pieces, as if in an arcade game. In place of gore, the blood is replaced with colourful confetti, candy, flowers, and butterflies.

Makoto Aida's sculpture, Comet-Chan (2013), takes aim at the seriousness of Japanese science fiction and universal standards of cultural value. An alien occupying the form of an adolescent girl defecates pink fluorescent faeces on the earth, and is posed to wipe her rear with a page from the Gutenberg bible.

The range of Makoto Aida's oeuvre continues to expand as the artist explores new topics and modes of expression. Explaining this state of flux in Ocula Magazine, Aida states, 'I have ADHD, and am very active. I cannot keep on doing the same thing. I have to keep on doing different things.'

Makoto Aida's art has been presented to audiences around the world in group and solo shows, and in international art events, such as the São Paulo Art Biennial and the Busan Biennale.

One of the main barriers between Japan and the rest of the world is language. There is also a gap between what people think is domestic Japanese art and international art.

Too many Tokyoites miss the Museum of Contemporary Art Tokyo (MOT) altogether. Beyond both the Ueno museums and the network of newer art spaces in Roppongi, this institution of first-class exhibition facilities, a vast pubic art library and one of the most significant global collections of contemporary Japanese art takes you by surprise in Old...

A famous Japanese contemporary artist is embroiled in an angry fight with a major museum after it allegedly asked him to take down works critical of the conservative government. Makoto Aida claims the Museum of Contemporary Art Tokyo asked him to pull an installation in which he apparently mocks the Japanese prime minister, and that they called it...

Catherine David, Chief Curator and Deputy Director at the Centre Pompidou, and the artist Makoto Aida discuss his installation "Ground No Plan," which advocates a fictional architectural ideological m

Mizuma Art Gallery is pleased to announce the opening of AIDA Makoto's solo exhibition Let us dream of evanescence, and linger in the beautiful foolishness of things, on Wednesday 6th July. For this exhibition, at the milestone age of 50 years, Aida takes up the challenge of a completely new set of techniques, forms and materials that he...

Be among the first to know when new artworks and exhibitions by Makoto Aida are added to Ocula.
Sign Up Login