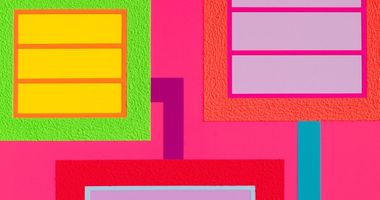 Peter Halley is an American artist, writer, and leading figure of the Neo-Conceptualism. He is best known for his geometric Day Glo paintings of the 1980s and 90s that explore the organisation of contemporary life through systems and networks. He has also published numerous essays on art and co-founded the art and culture magazine index, which ran from 1996 to 2005.

Peter Halley rose to prominence in the mid-1980s among the artist community of New York's East Village, exhibiting in its artist-run spaces among artists such as Jeff Koons, Ashley Bickerton, and Richard Prince. Theoretically minded, Halley sought to repurpose the language of art historical abstraction for what he saw was the complete geometricization of social space under the technological and industrial developments of the late 20th century.

Influenced by the geometry of the surrounding city and the French poststructuralist theory that was shaping intellectual discourse in New York in the late 1970s, Halley developed a formal iconography that defined postmodern subjectivity through networks of exchange and regulation. Composed from square 'prisons' or 'cells' connected via 'conduits', his paintings were often rendered in fluorescent Day Glo paint, with surface texture produced by a commercial surfacing tool used in suburban homes and motels. Red Cell with Conduit (1982) invokes this systematisation of information, social life, and the self. A bright red field of colour separated into a textured cell with a conduit beneath, it recalls the flow of electricity or the transportation of goods.

By using commercial painting materials and high-keyed colour, Peter Halley also invoked pop cultural imagery, such as fluorescent street signs or New Wave pop aesthetics, declaring artmaking in the postmodern era as totally divorced from the representation of the natural world. In 1986, Halley was featured in a break-out exhibition at the Sonnabend Gallery, an established gallery in New York. Marking a departure from the stylistically dominant Neo-Expressionism, heralded by artists such as Julian Schnabel and Enzo Cucchi, the show distinguished Halley as a central figure in the emergent Neo-Geo or Neo-Expressionist movement.

In the 1990s, Peter Halley's work developed in response to the digital revolution. In 1993, Halley produced Superdream Mutation, a web-based print that is thought to be the first artwork made exclusively for online viewing and sale. Branching out into digital software, printmaking, and comic-book influenced imagery, Halley also began to stage site-specific installations. These included an installation at the Dallas Museum of Art in 1995, which employed a mixture of painting, wall-sized flow charts, and digitally produced wallpaper prints. Halley has also produced a number of permanent public works, including a large painting at Dallas/Fort Worth International Airport, Texas (2005). In 2011, he exhibited Judgement Day, a series of digital prints, in the Palazzo Bembo as part of the 54th Venice Biennale, and in 2018 staged a large-scale presentation at the Lever House, New York.

As a writer, Peter Halley produced numerous essays between the 1980s and the early 2000s. Much like his paintings, these interrogated the relationship between the individual and larger social structures, and included theoretical essays on art, such as 'Essence and Model' (1988). Halley has also taught at Columbia University, New York, and the University of California, Los Angeles. From 2002 to 2011, he served as the Director of Graduate Studies in Painting and Printmaking at the Yale University School of Art.

Fate of a Cell, a group show in Athens, is anchored to the ideas of 20th-century urban planner Constantinos A. Doxiadis.

A central fixture in New York's conceptualist Neo-Geo scene of the 1980s, Peter Halley's work all but disappeared from the city's galleries by the start of the '90s, and for the subsequent decade was exhibited chiefly abroad. Sperone Westwater's recent show comprised ten paintings Halley made between 1997 and 2002 that are owned by Gian Enzo...

We live in a state of the perpetual present. With the revolving door of exhibitions in more and more venues, commercial and scholarly alike, thousands of artists appear on a relatively flat plane of aesthetics. This is good for a lot of things—fair art criticism among them—but it tends to hurt our understanding, as viewers, of where the...

Be among the first to know when new artworks and exhibitions by Peter Halley are added to Ocula.
Sign UpLogin