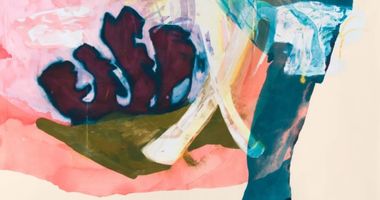 Ragna Bley is a Swedish-born contemporary artist. Primarily a painter, Bley experiments with form and material on large sailcloth to create contradictory abstract works that are at once cerebral and intuitive.

Bley was born in Uppsala, Sweden. She attended the National Academy of Fine Arts in Oslo and graduated in 2011. She received her MA in Painting from the Royal College of Art, London in 2015. As well as working as an artist, Bley has also been a guest lecturer at various art schools and has also curated several exhibitions.

Ragna Bley creates experimental works. Bley's paintings are large and abstract. She plays with form and colour, creating a sense of movement across the image. Her paintings are both intellectual and instinctive.

Bley paints on the floor of her studio in Oslo. Despite their appearance of spontaneity, Bley's paintings are meticulously planned through series of sketches and practices. The paintings are created by pouring and manipulating thinned paint across sailcloth. Bley works the paint into the desired composition with spatulas, brushes, rulers, and her hands.

Some works such as Level Plains (2020) show more clearly where the artist has manipulated the paint. Other works such as Undertown (Heat) (2020) appear more free-flowing, as though the paint created the work on its own. Horizontal painting has been interpreted in modern painting as a challenge to the more traditional and 'civilised' practice of painting on a vertical easel.

Unpredictability is another element of Bley's work. She submits her work to natural forces, including the harsh Scandinavian weather, allowing it to shape her work. Bley will sew pockets of pigmented material such as coffee and tea into the canvases, allowing the colours to bleed out and create the work. In her series 'ANNO' (2019), Bley prepared the canvases with pigments and food items and exhibited them outdoors. Here, Bley allowed the painting to paint itself, exploring the space between deliberate work and unpredictable process.

Bley also works in other media, including sculpture. Often, sculptural elements are incorporated into her two-dimensional work. Bley's Bowl Gone Black Nor Bud Nor Boys (2016) bridges the gap between sculpture and painting. The work was exhibited in 2016 in Roaming, a group show at UKS, Oslo. In the exhibition, the work, which consists of a large abstract work on a sheet of Dacron and two sculpted hands, was suspended over a stairwell. Bley experiments with three-dimensional space and the boundaries between traditional art forms.

In 2015, Bley won the Hine Painting Prize at her alma mater, the Royal Collage of Art, London.

Ragna Bley has exhibited her work in both solo and group exhibitions.

Group exhibitions she has been shown in include Variations in Scandinavian Abstraction (2016) at Galleri Brandstrup, Oslo; the 2017 Norwegian Sculpture Biennale; and The Moderna Exhibition (2018) at Moderna Museet, Stockholm.

Sign up to be notified when new artworks and exhibitions by Ragna Bley are added to Ocula.
Sign Up Login