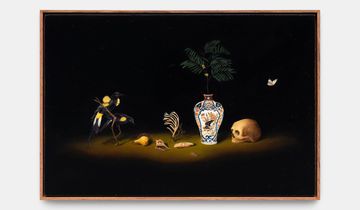 Sanam Khatibi is a Belgian artist who is known for her paintings and tapestries that explore themes of human nature, power, and desire. Khatibi's practice is influenced by artists such as Frida Kahlo and Hieronymus Bosch, and often references important historical sources including the Bayeux Tapestry.

Khatibi was born in Tehran, Iran. She was raised in Copenhagen, London, and Brussels. Growing up in Europe, Khatibi was exposed to work by western and non-western masters from a young age.

At the age of six, Khatibi discovered Hieronymus Bosch. She was told by someone who was trying to scare her that the imagery portrayed in his paintings were a representation of what would happen to humans if they were sent to hell. Instead of feeling fearful of the artwork, Khatibi became fascinated by Bosch and spent time studying each of his paintings in a book of the artist's work. Her fascination led to her discovery of other artists including Henry Darger, Nancy Spero, and Francis Bacon.

Khatibi's mother was extremely passionate about the arts and regularly bought artwork to contribute to her own private collection. Khatibi grew up around art objects and inherited her mother's adoration for visual arts and culture.

In 2009, Khatibi graduated from Central Saint Martins in London with a Masters in Fine Art.

She is known for her Renaissance-style landscapes depicting intriguing narratives that explore themes of destruction, chaos, domination, and submission. Khatibi is interested in human nature and the relationship between impulse and restraint, fear and desire. Her work often features human figures engaging in hunting, sex, and violence amid surroundings that are rich in flora and fauna.

In My Dreams, I Kill Him Every Night (2022) is a large-scale work made from oil and pencil on canvas. The painting features a giant figure engaging in the act of cannibalism. Khatibi's composition is similar to Bosch's violent and surreal paintings.

In My Dreams, I Kill Him Every Night (2022) is also the title of Khatibi's 2022 solo exhibition at Mendes Wood DM in São Paulo. Several paintings featured in the exhibition portray nude, oversized women engaging in either destructive or seductive acts. Khatibi's giant women act as striking representations of female power and occupy the fine line between fear and desire.

In 2017, Khatibi was commissioned to create a new site-specific work for a billboard in Ghent, Belgium. With Tenderness and Longing (2017) was displayed for three months on a 50-square-metre billboard on Dok Noord.

Khatibi's public commission depicts an Arcadian landscape with naked women at the centre. The women have been hunting and are in the process of skinning rabbits. While Khatibi depicts women in traditional human form, animals represent her portrayal of men.

With Tenderness and Longing explores the power structures between women and men, and human and animal. Khatibi's female figures represent powerful characters that hold dominance over her submissive male characters. The Renaissance-style painting captures Khatibi's interest in primal instinct and the complexity of human nature.

Sanam Khatibi has exhibited in solo and group exhibitions.