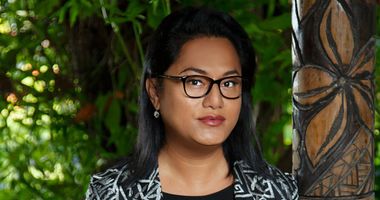 Yuki Kihara is renowned for delving into the complexities of postcolonial histories in the Pacific and interrogating Western misinterpretations from the perspective of Fa'afafine (Samoan for 'in the manner of a woman' broadly understood as the LGBTIQ+ in the Western context) community which she belongs to in Samoa.

In 2008 Kihara held a solo exhibition Living Photographs at the Metropolitan Museum of Art, and in 2012 Kihara received the Wallace Arts Trust Paramount Award and the New Generation Award from The Arts Foundation.

Kihara conceived the Firsts Solidarity Network after becoming the first Pasifika, Asian, and trans artist to represent New Zealand at the event.

The event will feature contributions from artists Ho Rui An, Saodat Ismailova, Yuki Kihara, and ruangrupa's Reza Afisina, among others.

Hawaii has a population of more than 1.4 million people but not a single museum is dedicated to contemporary art, said Isabella Ellaheh Hughes, a co-founder of the first Honolulu Biennial, which will open in spring 2017. “We can both highlight our tremendous local talent as well as bring in national and international contemporary artists...

Sign up to be notified when new artworks and exhibitions by Yuki Kihara are added to Ocula.
Sign Up Login