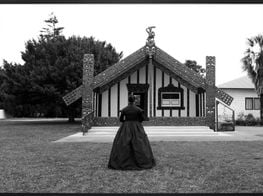 Kihara conceived the Firsts Solidarity Network after becoming the first Pasifika, Asian, and trans artist to represent New Zealand at the event.

The New Zealand Pavilion today announced the launch of the 'Firsts Solidarity Network', which seeks to support artists and pavilions making historic breakthroughs at the 59th Venice Biennale. The idea was conceived by Yuki Kihara, who will represent New Zealand in Venice.

'In the New Zealand context, the official announcement of my selection was an historical moment in our country where the glass ceiling was finally shattered,' she continued. 'The Pasifika arts community was finally being recognised when New Zealand was reckoning with its colonial past with Pasifika peoples and their home islands across the Moana Pacific region.'

In total, five countries are participating in the Venice Biennale for the first time—Cameroon, Namibia, Nepal, Oman, and Uganda. Additionally, Kazakhstan, Kyrgyzstan, and Uzbekistan will have their own pavilions for the first time.

Kihara said she was motivated to reach out to artists from other countries after hearing Natalie King, curator of the New Zealand Pavilion, share her experience with the Australian Pavilion in 2017.

'Many national pavilions were operating in a silo of non-disclosure, hardly any interaction or communication with each other,' Kihara said. 'So, the Firsts Solidarity Network helps break the ice for us to come together as a community within the Venice Biennale and share audiences as we plan to produce a map to build an itinerary across our respective pavilions.'

In a similar spirit, Estonia will take over the Dutch pavilion, and Tomo Savić-Gecan will represent Croatia with an exhibition that's distributed across other national pavilions. His work uses an algorithm based on news headlines to select the location, movements, and frequency of performances.

Kihara said the Firsts Solidarity Network would provide support in myriad forms, from lending tools and checking on progress during installation to advice and camaraderie.

'I'm looking forward to the informal gathering for the Firsts Solidarity Network held a week before the official opening of the Venice Biennale at Ocean Space so we can finally meet each other in person after so many zooms before we all go back to the grind of preparing our respective exhibitions,' Kihara said. —[O]

I don't like to work in an authorial singular way; I like to work collaboratively with multiple voices so I put together a curatorium.

Curator Cecilia Alemani has named 213 artists that will present their work in the Venice Biennale's main exhibition opening on 23 April, titled 'The Milk of Dreams'.