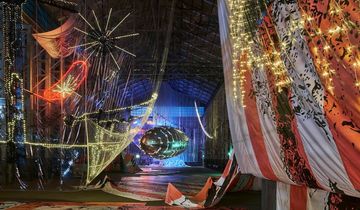 Provocative and inventive, Lee Bul (이불) is one of the leading Korean artists of her generation. Working across performance, sculpture, painting, installation and video, she is most known for her monstrous sculptures, cyborgs, and utopian landscapes. Born to dissident parents during the military dictatorship of Park Chung-Hee in South Korea, Lee emerged in the 1990s through works that channelled the emotional impact of political persecution and restrictive gender roles into visual form. Since then, the artist has investigated human desires for perfection and stability and the implications of technology in the contemporary world.

After completing her studies at Hongik University in 1987, Lee Bul embarked on her career as a performance artist on the streets of Korea and Japan. Donning soft wearable sculptures that were described as 'simultaneously alluring and grotesque' by Ikon Gallery, she addressed the themes of political instability and gender roles in a then—and still—very conservative and male-dominated Korean society.

In Cravings (1989), Lee transformed herself into a monstrous creature, whose tentacles and externalised internal organs alluded to the anxieties of the artist and her fellow citizens living under conditions fraught with government censorship and civil unrest. The performance later developed into the 'Monster' (1998–2011) series, in which the wearable sculptures evolved into freestanding statues.

Abortion, also performed in 1989, showed the artist hanging upside down from the ceiling and generated controversy for Lee Bul's bold critique of Korean traditions regarding women's bodies and sexuality. Around this time, Lee also participated in the founding of Museum, an underground collective of avant-garde artists, performers and musicians in Seoul whose members are still influential in Korea today.

Lee Bul's artwork from the 1990s explores the human body in its relation to beauty, life, death, and technology. Majestic Splendor (1997)—an installation created for The Museum of Modern Art (MoMA), New York—consisted of a decaying fish adorned with sequins, beads and flowers in a glass display case. Although the exhibition closed prematurely due to its smell, curator Harald Szeemann invited Lee to recreate it in the Lyon Biennale that same year. In a powerful visualisation of the metamorphosis from the beautiful to the sickening, Lee highlighted the inevitable cycle of life and death.

Lee Bul's iconic 'Cyborg' (1997–2011) series examines the human desire for the perfect body. Cyborg Red and Cyborg Blue, both completed in 1997 as a pair, show silicon casts of female figures based on Greco-Roman statues with machine-like body parts. Because Lee's cyborgs often appear as female, they have been regarded as a critique of the social expectation for women to have idealised bodies.

However, Lee has shown that her concerns extend to humankind at large in her karaoke installations such as Gravity Greater than Velocity (1999) and Live Forever (2002). Safely tucked in the empty karaoke capsules and pods, the human body is reduced to its sensory functions—technology may be alluring, but humans have reason to be alarmed about its advancements.

In the new millennium, Lee Bul shifted away from the body to human desires for utopia. Architectural sculptures, drawings, and installations exploring utopia form the crux of Utopia Saved (2020), the artist's solo exhibition at Manage Central Exhibition Hall, St Petersburg, that was featured in an Ocula Photolog. Among the works on view was the 'Mon grand récit' series, ongoing since 2005, which features futuristic ruins and landscapes comprised of small-scale railways, LED signs, and architectural structures. Writing for Ocula Magazine in November 2020, Stephanie Bailey noted that the exhibition 'is as much about sensing utopia's textures as it is about feeling its loss'.

Lee also began to incorporate reflective materials in her architectural installations, most notably in After Bruno Taut (Devotion to Drift) (2013)—a floating palace of crystal beads, chains and mirrors. Inspired by the futuristic ideals and works of Bruno Taut, a 20th-century German architect and the creator of the Glass Pavilion, Lee uses reflectivity to allude to utopian ideals as well as a means to examine military Korea, now several decades in the past.

In 2020, Lehmann Maupin organised the first solo exhibition of Lee Bul's paintings in Hong Kong at Hong Kong Spotlight by Art Basel. The presentation, which focused on Lee's 'Perdu' series of paintings made with a mixture of mother of pearl and paint, was included in Ocula Magazine's 'Hong Kong Spotlight: Six Artists to Watch'.

The nomadic European biennial has the near unparsable title it matters what worlds world worlds: how to tell stories otherwise.

Paintings by Giorgio Morandi, Ivy Haldeman, and Lee Bul are among our top picks at this year's art fair, JINGART Beijing. ⁠⁠

The 1990's, the last decade before the new millennium, was a turbulent period, surpassing any other turn of the century in terms of major upheavals. Large changes occurred across the board, at all lev

Feminist science-fiction has long played on the idea that women are liberated when humans are confronted with other intelligences.

The sci-fi imagination of Lee Bul literally lit up the Hayward Gallery last night, as one of the artist’s works set on fire just an hour before the private view was scheduled to occur. It was an appro

Artist Lee Bul reveals her thinking and inspiration behind her site-specific installation at the Turbine Hall of the Industrial Precinct on Cockatoo Island, titled Willing To Be Vulnerable (2015–16) for the Embassy of the Real.

Sign up to be notified when new artworks and exhibitions by Lee Bul are added to Ocula.
Sign Up Login