Acclaimed Czech contemporary artist Vladimír Kokolia's first solo exhibition in Taiwan, Inner Emigration: The Frame of an Image Is You, will be held from July 4 to October 18 at Taipei Fine Arts Museum. Curated by Czech art historian and independent curator Miroslav Ambroz, it presents the artist's 40-year career, including recent works never before unveiled to the public, plus some specifically created for the TFAM installation. Taipei Fine Arts Museum director Ping Lin noted, 'Kokolia is deft at weaving seemingly trivial things in life together into a marvelous vision, manifested as unique abstract expressions. Even so, quite interestingly, it's hard to distinguish if his works are abstract or figurative. We are honored to hold his solo exhibition at TFAM.'

Vladimír Kokolia (born in 1956) is one of the most important contemporary artists in the Czech Republic. Kokolia gained international attention at the beginning of the 1990s, which led to exhibitions of his works at documenta (Kassel, Germany); the Third Eye Center (Glasgow, UK); the Ludwig Forum (Aachen, Germany); S.M.A.K. (Gent, Belgium); the National Taiwan Museum of Fine Arts; the Walker Hill Art Center (Seoul, South Korea); the Otis/Parsons Gallery (Los Angeles, USA); PS1 (New York, USA) and many others. More recently, he presented major solo exhibition projects at MOCA in Chengdu, China, and at the IKON Gallery in Birmingham, UK. Besides being an artist, he was also the lead singer and lyricist of the legendary Czech underground rock band E and is a longtime student of the Chen style of Taijiquan. His deep philosophical and spiritual explorations in a variety of practices are reflected in his art. Kokolia is also committed to art education and has taught many outstanding young artists for nearly 30 years at the Academy of Fine Arts in Prague.

The phrase 'Inner Emigration' was coined by Frank Thiess, a German writer of Russian ancestry, during the Nazi era. The curator Miroslav Ambroz says: "For people who find themselves totally out of step with the alien rule of their own country but are not able to physically escape a repressive regime, an 'inner emigration' is often the only solution to their plight. They encase their thoughts and feelings in a cocoon of close family or trustworthy friends, or even in complete solitude." Having gone through the Prague Spring of 1968, Kokolia spent half his life in communist Czechoslovakia and profoundly experienced the life state of 'inner emigration.' In this exhibition the artist seeks to examine the broader meaning of this idiom, as a strategy to gain peace and power, by turning one's orientation inward when one's inner life is being consumed by the outside world.

For Kokolia, visual images are a time-based medium. Their ultimate appearance is not the central point. He says, 'I do not paint images, I paint the source things.' He believes that through prolonged gazing, viewers can step outside of themselves and over to the other side — to enter the image. Kokolia has long lived in a village in Moravia, in the eastern part of the Czech Republic, surrounded by greenery and absorbed in observing the changes of trees, which have been his subject matter for many years. He has transformed the visual experience of tree leaves filtering the sunlight and the breeze rustling the leaves into numerous oil paintings with intricately intertwining brushstrokes. In such works as Birch (2002), Looking at an Ash Tree in Backlighting (2016), and Breeze in the Treetop (2019) he has attempted to document this spiritual and visual journey of discovery.

From 1981 to 1986, while taking a break from his oil painting, Kokolia produced hundreds of ink drawings on paper, which he called his 'Big Cycle Drawings.' The exhibition includes 116 of these works and is the first time these drawings will be exhibited in Taiwan since their creation more than three decades ago. Sketching quickly with bold lines, he simplified individuals as worm-like characters in a variety of absurd scenarios in which they resisted fate and fought to survive. They often find themselves trapped in bizarre, illogical predicaments they cannot escape, but their strenuous efforts to disentangle themselves are both funny and futile. Kokolia once shared the motivation that drove him to create these works: 'I'm fascinated by the gulf between the utter matter-of-factness with which we accept our daily routines and the obvious senselessness of it all.'

In the early 1980s Kokolia began applying the concept of 'stereograms' to his works as yet another level of the viewer's involvement in the image space. These images appear in the exhibition in several different forms: paintings, video projections, and large-scale colour printouts on floor-to-ceiling panes of glass. Treetop (2020) is a new video work. The artist circled the crown of a tree with a film camera, capturing 9,000 frames at a rate of about 30 seconds per circumnavigation. He then sliced each frame into 100 vertical strips, then reassembled the new frames into a video with a three-dimensional feel. The multilayered, subtle variations in green that emerge allow us to behold a tree crown in a fresh, poetic dimension.

In Kokolia's paintings and installations, the role of the viewer is key. 'Without the viewer's sight, an artwork actually does not exist,' Kokolia declares. At the same time, he considers images to be more than mere bearers of information and tools of communication. Kokolia uses various 'deceleration techniques' — such as a reduced level of lighting — because a prolonged viewing period is crucial in breaking down the distance between the viewer and the image. The images are not fully 'exposed' in the gallery, but remain latent to some extent. It is up to the viewer whether they will develop in a way similar to how photographic film used to be processed in the analogue age.

Inner Emigration: The Frame of an Image Is You 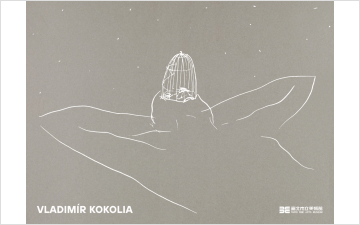 Inner emigration: the frame of an image is you Vladimír Kokolia

Sign up to be among the first to know when new exhibitions by Vladimír Kokolia, or at Taipei Fine Arts Museum open.
Sign UpLogin