A Ghanaian grain silo and a sculpture featuring the faces of 850 trans women are among six works being shown in miniature.

Models of six sculptures that could one day top the Fourth Plinth in Trafalgar Square are now on view at the National Gallery, London.

The six nominees for the Fourth Plinth commission include an oversized jewellery tree by Nicole Eisenman, a rocket by Goshka Macuga, and a Ghanaian grain silo by Ibrahim Mahama.

The other nominees are a block of faces cast from trans women by Teresa Margolles, a figure from German folklore by Paloma Varga Weisz, and a sculpture by Samson Kambalu of Baptist preacher and pan-Africanist John Chilembwe who broke the law in 1914 simply by wearing a hat.

One of the winning works will replace Heather Phillipson's sculpture THE END (2020)—a dollop of whipped cream topped with a cherry, a housefly and a drone—when it is removed from the Fourth Plinth in September 2022. The other will be unveiled in 2024.

Contemporary art has been shown on the Fourth Plinth since 1998. The plinth was originally intended for an equestrian sculpture of William IV that was abandoned in 1841 when funds ran dry. The square's other three plinths are occupied by statues of George IV, General Sir Charles James Napier, and Major-General Sir Henry Havelock.

The Fourth Plinth commission is funded by the Mayor of London with support from Arts Council England and Bloomberg Philanthropies.

'It casts new light on London's most historic square, helping our public landscape to reflect, represent and celebrate many more of our stories,' said Justine Simons OBE, Deputy Mayor for Culture and the Creative Industries.

The exhibition at the National Gallery will continue through 4 July. A virtual experience of the exhibition can also be had on Google Arts & Culture.

Images of all six shortlisted works along with descriptions from the office of the Mayor of London can be viewed below. —[O]

On Hunger and Farming in the Skies of the Past 1957-1966 by Ibrahim Mahama recreates a grain silo partially built by Eastern European architects in Ghana in the early 1960s in a towering structure filled with living plants. Photo: James O Jenkins.
Bumpman for Trafalgar Square by Paloma Varga Weisz is a figure inspired by the German 'Wundergestalt' tradition and the spirit of German folklore. Photo: James O Jenkins.
Antelope by Samson Kambalu restages a 1914 photograph of Baptist preacher and pan-Africanist John Chilembwe and European missionary John Chorley. Chilembwe wears a hat in an act of defiance as this was illegal at the time. Photo: James O Jenkins.
Improntas (Imprint) by Teresa Margolles features casts of the faces of 850 trans people, most of whom are sex workers, arranged round the plinth in the form of a Tzompantli, a skull rack from Mesoamerican civilisations. Photo: James O Jenkins.
The Jewellery Tree by Nicole Eisenman recreates the household object on a monumental scale, with Lord Nelson's medals, a fife and drum and a plastic coffee lid. Photo: James O Jenkins.
GO NO GO by Goshka Macuga is a giant rocket encouraging audiences to look beyond our own immediate surroundings and up to outer space. Photo: James O Jenkins.
Submit art news, announcements, and tips to [email protected] 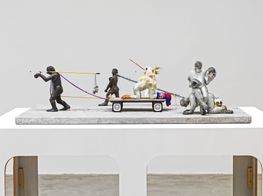 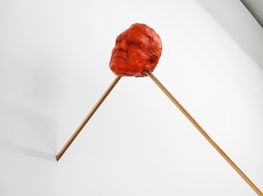 Given her research-heavy approach to art-making, London-based artist Goshka Macuga is often compared to an archivist, historian, archaeologist, or curator. While her practice encompasses collage, installation, sculpture, tapestry, performance, film, 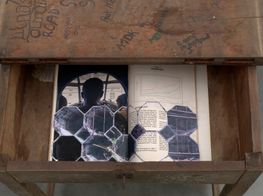 Concerned with value, global commerce and the detritus of colonialism, artist Ibrahim Mahama is known for large-scale installations made from materials with particular significance to Ghana's past and present. Early Years Mahama was born in 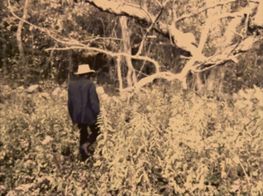 Malawi-born contemporary artist, writer, and academic Samson Kambalu playfully explores art as a medium for critical thought and expressions of sovereignty. He is renowned for his 'Nyau Cinema' projects and mixed-media conceptual artworks, including